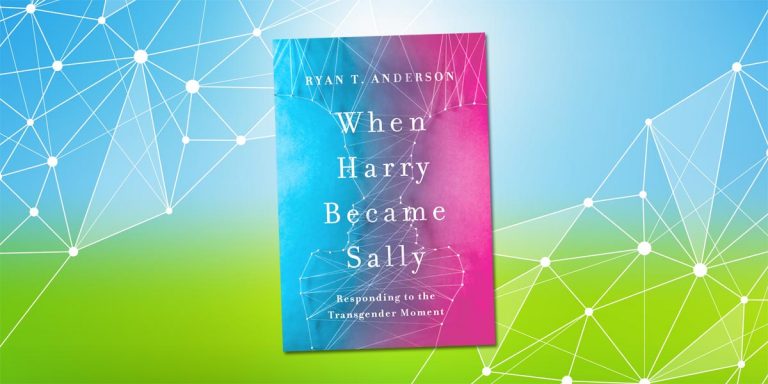 When Harry Became Sally: Responding to the Transgender Moment

Kathy Baldock, one of the LGBTQ community’s fiercest mama bears, takes a scalpel to Ryan Anderson’s latest book. As you’d expect from a Heritage Foundation crony, this book employs deliberate ignorance, and serves only as paid propaganda for the social and political right.

When asked why he was working on “When Harry Became Sally—Responding to the Transgender Moment,” Ryan T. Anderson, research fellow at The Heritage Foundation, wrote “The simple answer is that I couldn’t shake from my mind the stories of people who had de-transitioned. They are heartbreaking. Those most vulnerable to the transgender moment need a book like this, and I had the resources to research and write it” (p. 205).

Having read and reviewed two other books by Anderson, I question his stated altruistic concern for “detransitioners” as the motive for his latest book. After all, as confirmed by the people whose stories he used, Anderson did not even attempt personal contact with four of the six people he used as examples in Chapter Three—Detransitioners Tell Their Stories.

Anderson wholly neglects to engage the stories of the majority of transgender people who have happily and successfully transitioned. Unlike Anderson, I know hundreds of transgender people, some quite personally. My experience, relationships, and knowledge are completely contrary to Anderson’s suggestion that people are better served by not transitioning. I know people who would have died or led lives of utter depression and isolation without the opportunity to live authentic to who God created them to be. I know parents who have seen their children transform from near-crisis and suicide to flourishing.

I imagine some of his readers may balk at the suggestion that transgender people are indeed created by and in the image of  God. And while Anderson insists that there are no studies tying biology to transgender conditions, he is wrong. There are dozens of studies establishing a biological connection to transgender conditions easily found on the internet — a few: Baker in Focus on Sexuality; Chung and Wilson in European Journal of Physiology; Swaab and Bao in Neuroscience in the 21st Century; Lombardo in The Journal of Neuroscience; Serkan Karaismailoğlu; Ayşen Erdem, Journal of the Turkish-German Gynecological Association — yet all go utterly ignored by social, political and religious conservatives.

While medical experts who study the brain say we are still about forty years out from understanding what it is that causes a person to be transgender, we, especially those of us who claim to be followers of the mercy and justice of Jesus, can most certainly use what we do know and listen to the voices of transgender adults, teens, and parents with transgender children so that we might navigate our way through policies and protections for transgender persons. This is most certainly a more compassionate, grace-filled, and informed manner in which to act, as opposed to those policies suggested by Anderson.

True to the glut of anti-transgender books coming out in the recent years, this socially, religiously and politically segment never, and I do mean never, cites testimonies from the overwhelming majority of people who do transition successfully.

Sadly, as expected, readers of “When Harry Became Sally” are not offered a single positive view of those who have transitioned successfully.

Further, it may surprise readers to know that the rate of detransition is estimated to be about one percent. For those who do transition from female to male, they almost never detransition back to female. Dr. Marci Bowers, who has been performing transgender surgeries in the U.S. for over fifteen years, says, “The numbers (of those who detransition) are so incredibly low. If anything, it reinforces the validity of gender transition in the first place.”

From the outset, the title of the book, “When Harry Became Sally,” is highly problematic considering Anderson’s stated goal is to push back on “misguided policies” with “compassion and grace.” Anderson never quite makes a reasonable or fluid connection between the “thorny issue” of “Can men and women really be ‘just friends’?” that he sees as the core issue of the 1989 film classic “When Harry Met Sally, and today’s more “fundamental” consideration “Can a man really become a woman?” (p. 1). It seems Anderson simply wanted to title his book with a clever, dehumanizing, and mocking tone, something I have found commonplace in his writings.

In the introduction, and throughout the book, Anderson argues that Dr. Paul McHugh “got it right” (p. 2). In fact, McHugh’s beliefs are at the center of much of Anderson’s core tenets and suggested policy. It is therefore crucial to look at McHugh and assess if his views should be considered as coming from an expert in the field of human sexuality and gender identity.

McHugh was the chief of psychiatry from 1975 until 2001 at the Johns Hopkins Hospital. He derailed a pioneer transgender program at the facility in 1979. McHugh believes that being transgender is a psychological, rather than a biological issue. His statements on homosexuality also break with the mainstream of professional medical expertise. McHugh believes “homosexuality is an erroneous desire” rather than simply an orientation on the spectrum of human sexuality, as it has been known to be since at least 1973 in medical circles. McHugh has also testified in court that homosexuality is a choice. No professional major medical association agrees with McHugh’s point of view on this.

Likewise, McHugh’s opinions on both gender identity and the dangers of transitioning, though popular with social and religious conservatives, have been discarded and are in complete contradiction to the American College of Obstetrics and Gynecology, the American Psychiatric Society, the American Public Health Association, and the World Professional Association for Transgender Health.

Even current faculty members of Johns Hopkins University have expressed great concern and have disavowed a report McHugh co-authored with Lawrence Mayer, a professor of statistics and biostatistics at ASU, entitled “Sexuality and Gender: Findings from the Biological and Psychological and Social Sciences” published in The New Atlantis—A Journal of Technology & Society. Though auspicious sounding, The New Atlantis is not a scientific journal, but rather a magazine published by the Ethics and Public Policy Center, a conservative Christian think tank.

McHugh’s current work on transgender issues, though never published in or subjected to peer review prior to publication, is cited no less than 60 times in Anderson’s book. Anderson thinks highly of McHugh’s work stating, “Dr. McHugh is an accomplished medical professional completely devoted to the health of his patients,” adding, “Liberal attacks on him are disgusting.” Fellow conservative news site, Lifesite, in lock step likewise says of McHugh, that he is “one of the most celebrated mental health professionals and researchers alive today.”

Because Anderson uses McHugh and likeminded sources whose ideas do not represent the general consensus of the medical establishment, “When Harry Became Sally” is rife with distortions, misuse of research, outdated and disproven theories, and policy suggestions that are so clearly based in anti-LGBTQ policies and positions.

A chapter by chapter assessment of such poorly constructed foundational truths would be tiresome to both reader and reviewer.

I do want to point out a few overarching observations, however.

1. Dismissive labels. Anderson seems to make a distinction between “activists” and “what activists say” as opposed to some other apparently more compliant group of transgender people who do not push back on conservative policy promoted by groups like the Heritage Foundation. He believes that it is the “activists” who are challenging traditional ideology and desirous of policy change and protections. I often wonder who, in the eyes of Anderson and those who dismiss “activists,” these more aggressive activists who must be contained are.

Is the person who advocates for own their humanity, dignity, choices, and ability to live authentically an “activist”? Is the parent who wants what is best for their teen child and chooses to follow the APA guidelines and the advice of a licensed therapist an “activist”? Is the Christian who pushes for inclusion and acceptance of a marginalized group an “activist”?

Anderson frequently assigns the advice, insights and findings offered by medical experts to a willy-nilly, non-truth, non-research based mongrel world of “activists.” It’s a slick, dismissive technique that erases solid and good information as if there were no foundational truth in “what activists say.”

2. Gnosticism? Another issue that keeps popping up in anti-trans literature lately is Gnosticism. I am not quite sure who or what group introduced the concept of equating transgender people to a “new form of Gnostics” (p. 46) in the past decade. It might be advisable for these transpeople-as-Gnostic proponents to ask questions and use logic rather than continuing to connect gnosticism with transgender people. Frankly, when you pick the connection apart, it makes absolutely no sense. Yet, it does effectively suggest transgender Christians and their allies as heretical. If the goal is to place this group further from biblical orthodoxy and stigmatize them, goal accomplished.

Gnosticism was a heretical movement in the 2nd century that espoused the need for a special knowledge from God that released a person from their material earthly body seen to be evil. Gnosticism believed in a tension between evil body and good spirit.

Calling transpeople Gnostic, according to the 2nd century model, assumes those who are transgender see their spirit (soul, psyche, inner sense of gender) as pure, but their material bodies as evil. Second century Gnostics kept the two realms (good spirit and evil body) apart so that they might attain greater spiritual and emotional well-being.

It is actually quite the opposite for transgender people. When they do transition and align gender (spirit/soul) and biological sex (body), they feel more integrated, not less so.

3. Pseudo-science. Anderson’s Chapter Four—What Makes a Man or a Woman has the facade of scientific basis and truth, and would likely convince the typical agenda-driven, there-is-something-wrong-with-transgender-people reader. Though I too am not a biologist, endocrinologist, or brain expert, I would love to watch Anderson engage such experts pitting his truths and dictums against theirs.

Again, Anderson’s basis for medical information comes from McHugh, et. al. When lives and their protections are at stake, I would hope that our policymakers in the government, culture, schools, and military would access real expert opinions and research rather than Anderson, who is so clearly a policy propagandist for the conservative social and political right, not a scientist or medical professional. I would also hope that those who are interested in greater understanding of the transgender community would engage them directly and relationally. There are hardly two consecutive pages in my copy of Anderson’s book where I haven’t made notes in the margins and written in frustration, disbelief, and disgust across the pages. Commenting on even a small percentage of those problematic passages, sentences, and paragraphs would require great effort because Anderson’s foundation of thought and belief are so counter to what is true in science and in the lives of transgender people themselves. I do often write what have been called “epic reviews,” but my objections would far exceed the five thousand word limit of an Amazon review.

From past experience with Anderson’s work, however, I would not have expected anything other than what he wrote in his newest book: socially conservative propaganda.

Anderson and his readers would benefit greatly if he would follow a simple rule in his work, whether he is writing a book about same-sex marriage, sexual orientation, or gender identity — don’t talk about people, talk to them. But that will likely never happen.  Anderson has a job and function at the Heritage Foundation: one of a paid propagandist for social conservatives. By employing purposeful, culpable ignorance, Anderson does his job well.