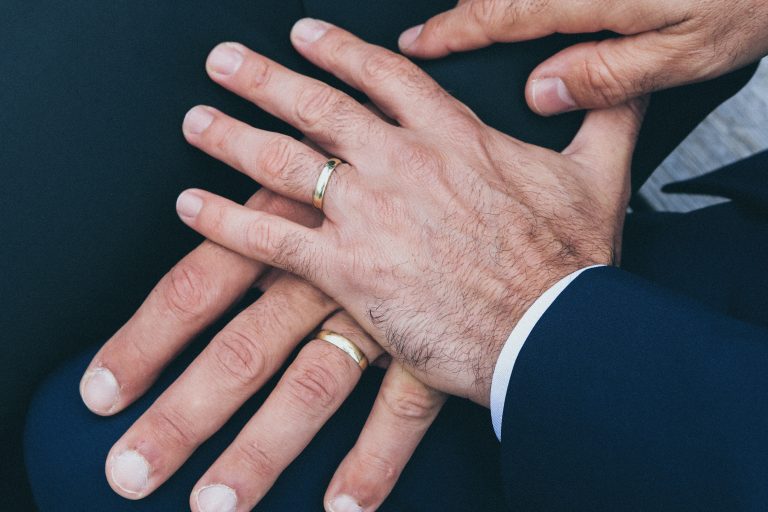 Dear Gay Uncle: My Boyfriend Proposed, but I’m not Out to my Parents

My partner proposed to me on New Years Eve. I was thrilled, taken back, and naturally said yes. We’ve been together five years and I love him dearly. He wants a spring wedding, something simple and intimate, which sound perfect to me.

My only issue is my parents don’t know I’m gay. I’m not closeted in life, I just moved away for college and never went back. I was an only child to older parents. My father was very homophobic when I was growing up and my mother supported his views, this was the time it was back then. They’re now in their late 80s, live in a retirement community and can’t travel too far for medical reasons. So they couldn’t come to the wedding even if they wanted to.

I call for the monthly phone call, but it’s just surface talk about their neighbours and their cat. They stopped asking about me bringing a girl home years ago. They assume I have a room mate when my partner answers the phone.

Should I tell them and give the option of a invite, or let things go on as they are?

They probably know and choose not to address it. You’re a mature grown adult and if no girl has been bought home over the years, unless you are a serving priest the writing is pretty much on the wall.

Ultimately only you know what’s best. If their views on homosexuality are still as aggressive, what benefit will it give you, or them? It sounds like they are in ill health at the moment. Is the desire to tell them that strong for you?

I have a daughter I never knew about

I’ve discovered I’ve have a daughter. Back in my college days I was discovering my sexuality and the last girl I slept with got back with her boyfriend, married him and we dropped out of contact.

This was thirty years ago, recently my daughter turned up at my doorstop and hit me with the bombshell. She found out as she was hoping to donate a kidney to her father, and discovered she wasn’t his. Her Mum admitted she’d only slept with one other guy and that was me.

She was very tearful but just wanted to see me in real life. She explained her father is still her father, but she just wanted to meet me. She doesn’t want anything from me. But now I know I have a daughter, I’m feeling elated and want to get to know her more. I’ve had a long conversation with her mother on the telephone. She was embarrassed but said after we slept together she saw me and another guy getting intimate and withdrew. She half hoped her daughter was her husband’s, but buried her head in the sand.

No one has told her father that she’s not his. The doctors have said his son is more of a match for a kidney transplant so they’re going down that route.

I want a relationship with her, but she doesn’t want her father to know or any of her siblings as it could be fed back to her father.

I’m torn, I want to shout it at the roof tops, I’ve two grandchildren that I’d love to meet. What can I do?

Wow! It must have been a shocker.

It’s a lot to take in. As to what to do, well, there’s not a lot you can do. You have to respect your daughter’s wishes, and just be there if she wants you. I know it’s crushing and tough to do, but if you want her in your life, do it on her terms and don’t force things, or you could cause more issues.

Ghosted by my BF

I got home last night to find a note from my boyfriend that he doesn’t think things are working out and he thinks the relationship should end. He’s cleared all his things out of the house and left the key. All the linked social media has been removed and he’s blocked me.

I went around to his apartment to talk things though, I know we’d been coasting with the relationship for the last year, but things weren’t that bad, at least they weren’t for me.

I’ve found out from a friend he’s moved offices with his job to New Zealand. He’s obviously been planning this for months, as when I looked online, getting a visa is a laborious exercise.

I’ve gone through feeling upset to feeling angry and fuming that he’s done something so deliberate.

I’d invested nearly four years into the relationship, we’d discussed getting married just before Christmas, but now I just think he was killing time before he abandoned me and the relationship.

How can I make these feelings go away and how do I get my life back? I’m now nearly fifty and feel terrified about being single and dating again.

Deep breath and calmly continue with life. Closure is difficult when the other party is on the other side of the globe.

Such behaviour is unbelievably rude and disrespectful.

One closure exercise you might try is to write out all your feelings, put them in an envelope, and then toss it on a fire. Getting everything out of your system is helpful and a start to giving you the opportunity to move on.

As to moving on, give yourself time to adapt and don’t feel you need to throw yourself out into the dating arena until you are completely ready. Invest in real life friendships and book in fun things to do with those friends.