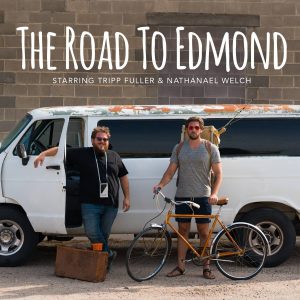 If I had known a certain church had a smoking hot youth pastor, I would’ve uprooted and joined his church years ago. Anyway…

It’s not every day that one comes across a progressive Christian movie. In fact, I’ve never heard of one. To me, the Christian movie world is dominated by Kirk Cameron, with cameos from Ray Comfort. Somewhat like Stan Lee (rest in peace). Only more conservative. And banana-y. 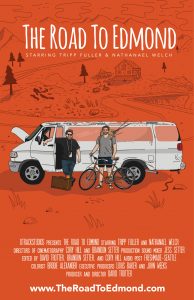 I don’t have any recollections as to how I got onto Tripp Fuller’s mailing list, which is how I found out about The Road to Edmond. But as a not-very-progressive Christian guy, I was curious to see what a movie that bills itself as “the absolute best progressive-Christian-road-trip-buddy-comedy” would be like – though I wasn’t sure if I was going to love it, or if I was going to cringe all the way through it.

Since The Road to Edmond’s makers had a pay-what-you-want streaming offer, I paid the price of a movie ticket and started watching.

Cleo (Nathanael Welch) is a youth pastor who was told to take time off work by his church’s elders. They weren’t happy with the love and acceptance he was showing towards one of the girls in his youth group, so they told him to take a break. Frustrated, he grabbed his camping and fishing gear and set off on his bicycle for some alone time. His plans got derailed when he had a run-in with the Jack Black-ish Larry (Tripp Fuller) travelling in White Lightning, a jalopy, with his dead dad.

Larry’s your loud, slightly-embarrassing friend with dubious hygiene, and a little too much fun at parties.

Cleo, marooned after the run-in, ends up on a road trip with Larry. Larry’s your loud, slightly-embarrassing friend with dubious hygiene, and a little too much fun at parties. This is in stark contrast to Cleo, a sullen, serious, sulky character who is practically the antithesis of fun. Even his sales pitch for Christianity, cajoled out by Larry, was stuffy and unconvincing. Larry’s various attempts to get some life out of Cleo were amusing and kept the movie light.

As with road trip movies, we learn more about the protagonists as they progress on the trip. It is revealed that Larry’s on a journey to complete a series of tasks along the way, which ultimately ends in Edmond, Oklahoma, hence the movie’s title. 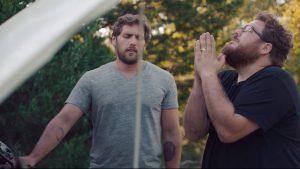 Alas, White Lightning breaks down and the pair end up camping by a river. It is here that we see exchanges of faith, theology and doubt being explored. It’s good to note that despite being a Christian movie, the theology is never presented smack in-your-face. It flows naturally within the dialogue and is never preachy.

There was one scene which I thought was totally unnecessary (did they really have to roll joints with Bible pages?), and there was one bit of theology I didn’t quite agree with, but apart from that, I’d say that despite the $30,000 budget, this movie is way better than any Kirk Cameron movie. Even Fireproof.

Despite the $30,000 budget, this movie is way better than any Kirk Cameron movie. Even Fireproof.

The Road to Edmond is a commendable debut effort. It was way better than I expected (seriously, do we have high expectations when it comes to Christian movies?), it was entertaining and gave me stuff to chew on. I loved the soundtrack and found myself Shazam-ing just about every other song. In fact, I watched it twice.

As a gay guy who’s intimately familiar with the Evangelical/Pentecostal world, and who’s been part of lay leadership at church, the movie has a personal level of relatability. I’ve had to grapple with some of the same issues and questions brought up by Cleo and Larry. I reckon many LGBTQ+ Evangelicals would probably feel the same way. This movie hits close to home for many of us.

Give The Road to Edmond a watch, even if you’re not-so-progressive. Heck, watch the movie with your small group and debate those …eh… less agreeable parts. There are many points for discussion as the movie touches on various questions and issues rife in the Evangelical and progressive worlds. I’m sure that even if you haven’t had to deal with such things directly, you’ve more than likely heard about them.

By the way, the movie left me with one burning question:

Is the handsome pastor single? Asking for a friend.

Learn more about The Road to Edmond at :

Images : © The Road To Edmond.