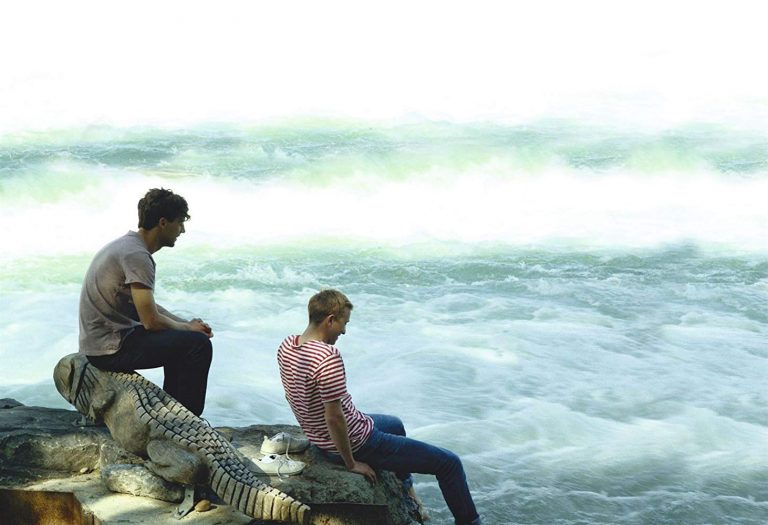 It’s winter in the northern hemisphere, and many of us are developing cabin fever. It’s the perfect chance to catch up on films. Recently I’ve discovered three recommendable gay male-themed films that give an opportunity to travel vicariously through Europe during the cold winter months.

What would you do if your partner suddenly departed over night without explanation? Take advantage of your mobile devices and open up a Grindr account, of course!

Pierre (Pascal Cervo) wakes up one morning and packs his things, leaving his lover Paul (Arthur Igual) asleep with no explanation. He takes off in his White Alfa Romeo to explore the French countryside, encountering various people along the way. He is quite open about his use of the infamous gay hookup app Grindr, explaining his different sexual needs to a female passenger he picks up along the way. Paul decides to track Pierre down, using Grindr to find him. The various encounters the two have with the French countryfolk are vigeniettes on the human condition.

The movie’s unique premise caught my eye when I stumbled upon the DVD at my local library, and it was nothing like I thought it would be. The short conversations between strangers bring life to the characters, as we know nothing about them. We don’t see their backstory, we don’t know why Pierre took off, and we don’t know how their relationship works. We just see Paul chasing after Pierre as the two drive through the beautiful countryside of rural France. It’s sort of a Before Sunrise for the 21st century.

Nearby Switzerland has a more traditional offering in the 2018 film Mario. Directed by Marcel Gisler, the coming-of-age drama tells the story of Mario (Max Hubacher), a young footballer who dreams of playing in the big leagues. When German newcomer Leon (Aaron Altaras) joins the club, he finds himself torn between his soccer dreams and his attraction to Leon. Things get interesting when the two begin rooming together. When the rumors start about the two athletes, Mario must make a decisionbetween his sexuality and his dream to be a famous soccer player.

While most of the movie takes place on the pitch or in their apartment, the teammates enjoy beautiful views of the snowy Swiss mountains. The film is in Swiss German, with English subtitles available.

If you’re longing to see the summer sun, there is always Screwed (Pihalla), a 2017 film from Finland. Yes, the sun does shine in the Finnish summer! Directed by Nils-Erik Ekblom, this coming-of-age drama is set in the beautiful Finnish forests on a lake.

After throwing a major party when his parents are out of town, adolescent Miku (Mikko Kaupplla) is forced to spend his summer in a cabin in the woods with his family. He soon meets the neighbor Elias (Valtteri Lehtinen), and after a few beers realizes there is a mutual attraction between the two. What will the neighbors think?

What do you think?

While we might be stuck inside on these grey winter days, thanks to DVDs and online streaming, we have the option to travel the world and see what it’s like to be gay in Europe.