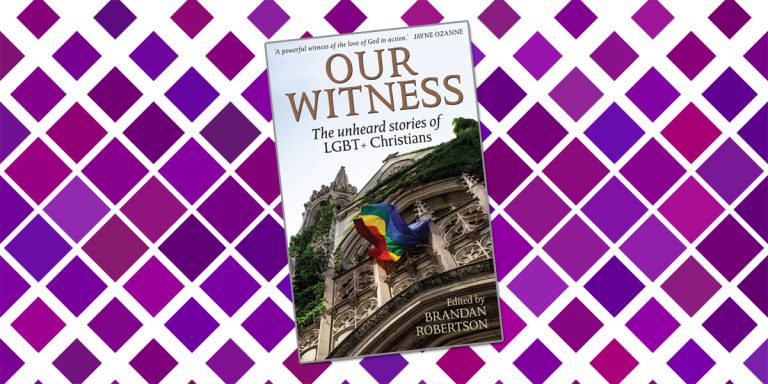 Books: “Our Witness: The unheard stories of LGBT+ Christians” Coming from Malaysia where the LGBTQ community tends to be neither seen nor heard, I was pretty thrilled when I found out about this book. While it doesn’t have stories of Malaysian LGBTQ Christians, I was still glad to be able to read the unheard stories and testimonies of the lives of people who are like me, a minority of a minority.

Our Witness: The unheard stories of LGBT+ Christians is a compilation of these stories, with Brandan Robertson as the curator. Through these stories, he takes us on a journey through the various facets of the LGBTQ Christian experience – Rejection, Reconciliation and Revival. I found myself resonating with some of these stories, and they made me realise that although I may be somewhat isolated, my experiences aren’t that much different from these people on the other side of the world. Yet it also broke my heart to know that despite the United States being a better place for LGBTQ people than Malaysia, some of these people have gone through things far worse than what I have ever experienced.

Brandan shares his own story (page 42), of how he grew up in a trailer park with an abusive alcoholic father, and how he fell in love with church, eventually becoming a pastor, yet being rejected when he decided to live authentically and true to how God created him.

This is a story we’ve heard regrettably one too many times as LGBTQ Christians. Sometimes Christian love can be conditional. Smiles can turn into side glances. Encouraging words turn into harsh words of condemnation. You become an exile, separated from what you once called community.

Yet I wish to reassure the prospective reader that this book isn’t all gloom. Far from it. There are numerous stories of hope, of reconciling one’s faith and orientation, finding a church home, and being at peace with one’s self.

This book is a witness and a reminder that God loves us and is working powerfully through us, and that we are very much a part of God’s family.

One story I particularly liked is Darren Calhoun’s story (page 100) of how the toxic beliefs of his then church got him to a point where he was told to give up everything, even his business, friends and family so he could be “fixed.” He ended up in a period of despair, feeling ashamed and unlovable. It led to compulsive behaviours. Yet through all of this, God pursued him and kept on reminding him that he was loved. And this story has a happy conclusion, with him being at peace that one can be both Christian and gay, being a worship leader, and having the freedom to live a life of love.

I would recommend this book to readers who aren’t LGBTQ, as this book will prove to be an eye-opening read. It opens a window into the lives of people whom we may have only heard about, but never really had a chance to listen to. This will go a long way in building bridges and fostering understanding.

For the LGBTQ Christian, you will find this a rewarding read and leave the book feeling that the world has become a smaller place. That there are people like you who understand what you’ve gone through, and might be going through, because they’ve been there too. This book is a witness and a reminder that God loves us and is working powerfully through us, and that we are very much a part of God’s family.

Available in hardcover, paperback and kindle at Amazon; and from the publisher, Darton, Longman & Todd.