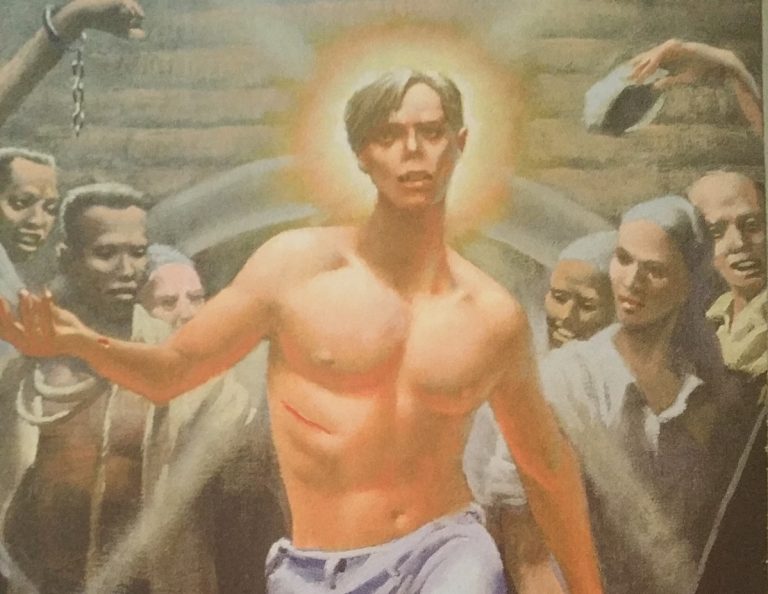 Review: “The Passion of the Christ: A Gay Vision” by Kittredge Cherry & Douglas Blanchard The Passion of Christ: A Gay Vision

It’s a bit shocking at first – at least to an evangelical believer, even a gay one.

The title itself almost slaps you in the face, first luring you with familiar religious tones, then almost sneaking in the punch: “The Passion of Christ: a Gay Vision.”  Half of you wants to be outraged; the other half is intrigued.  Your first instinct is to flip through the pages, looking at the artwork, with that same reaction: offense and curiosity. “You can’t do this to Jesus. That’s not how it was.”

But as you look more closely, you see Immanuel – God with us – portrayed in very human, very modern, terms. And that’s as true to the Gospel story as any classic Renaissance painting of Christ’s passion.

Dallas-born artist, Douglas Blanchard, began working on the 24 panels of his version of the Passion shortly before the attacks of 9/11. Sickened by the results of mindless religion, the terrorist attacks drove him more deeply into the project, motivating him to look beyond the surface of the faith-stories into the real meaning underneath them.

And while the images convey meaning many LGBTQ people can relate to, contrary to the impression the title might lend, Jesus is not portrayed as an obviously gay man. This is no radical repainting of the Christ-story in a politically-hostile, socially-oppressed gay context. Aside from one of the closing shots of Jesus ascending to the Father, there is no real hint of Jesus’ sexual orientation at all. He is simply a young, white male, beardless, athletic and urban – the deliberate attempt by the artist to link Jesus with contemporary life.

But a few examples will work better to describe this book than any short review could do justice to it. Images designed to provoke and evoke This review originally appeared in IMPACT Magazine in March 2015, and was reissued in Italian in Progetto Gionatta.