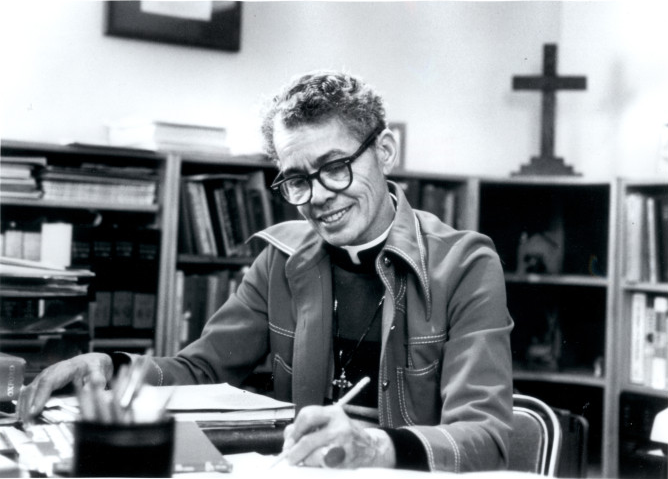 Dr. Pauli Murray was a remarkable woman who shattered ceilings of glass and perhaps even iron. Articles about Murray describe her as a black, queer, feminist, civil rights activist, lawyer, poet, professor, priest, and saint. That’s a lot of chapeaus to wear, but she managed them all with grace and dignity.

Anna Pauline Murray was the great granddaughter of slaves. Her mother died when she was a young child, and her father was murdered in a psychiatric hospital after suffering from emotional instability as a result of typhoid fever.

Murray’s childhood was tough, and made more difficult by racism and discrimination.

She was refused admittance to Columbia University because she was a woman, and to the University of Chapel Hill because she was black. Despite these discouragements, Murray was valedictorian of her law class at Howard University when she graduated in 1944 as the only female student. After graduation, she became California’s first black attorney general.

Murray’s civil rights work focused on women, and she coined the term “Jane Crow” while fighting for gender rights as an extension of the progress which had been made in overturning Jim Crow laws. She continued this work throughout her life, and was one of the founders of the National Organization for Women (NOW), and a board member of the American Civil Liberties Union (ACLU), through which she fought against employment discrimination of women.

Her friendship with Eleanor Roosevelt was instrumental in raising the First Lady’s awareness of the difficulties faced by disadvantaged people including women, people of color, and the poor. She eventually became a consultant to Presidents Franklin D. Roosevelt and John F. Kennedy on these issues.

Murray stood up against other cultural norms by speaking openly about being a lesbian, and presenting a more masculine gender than was typical for the day.

“…she lived on the edge of history, seeming to pull it along with her.”
(From Eleanor Holmes Norton’s introduction in Murray’s autobiography, Song in a Weary Throat)

Murray was a lifelong Episcopalian, and was ordained as the first African American female priest in 1977. She celebrated her first Eucharist in the chapel in which her grandmother was baptized, while enslaved. She was canonized in 2012, and her feast day is celebrated on July 1.

The 1960s were an era of civil rights progress and change, but the work is far from over. We live in an age where rights for LGBTQI+ people are threatened and when the widespread, routine abuse of women is finally gaining attention. Progress is made by those who are courageous enough to take action. Looking at Murray’s accomplishments can either overwhelm you with feelings of inferiority, or inspire you to activism within your own sphere of influence. I’m choosing the latter. I hope you do too.

Suzanne DeWitt Hall is the author of Where True Love Is: An Affirming Devotional for LGBTQI+ Individuals and Their Allies. She also wrote the Rumplepimple books; hilarious illustrated stories featuring a misunderstood doggy hero, his tutu-wearing sidekick cat named Mr. Noodles, and his two moms.