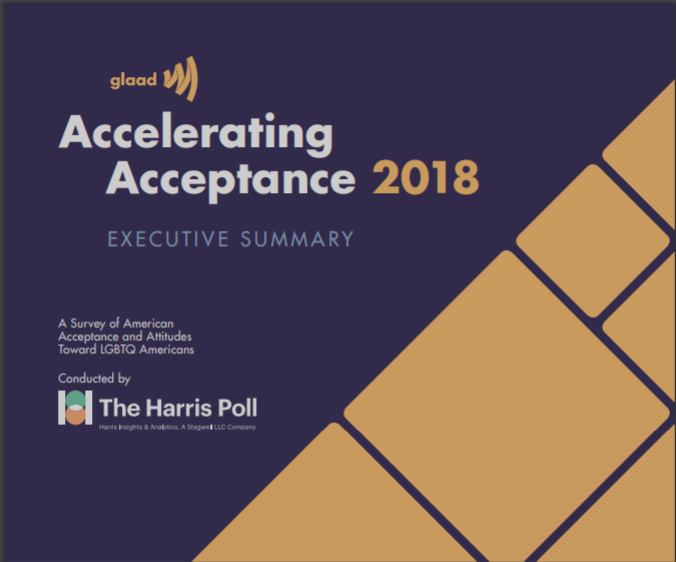 Poll suggests slipping support for LGBTQ people. Or maybe not. Earlier this month, a poll was released that showed that a slim majority of Americans are “somewhat” or “very” uncomfortable with LGBTQ people. The poll was released by GLAAD, a national organization working toward full equality for our Alphabet community.

As a result, multiple headlines across the country have shown panicked headlines that “Majority of Americans are Anti-Gay” or something similar. Others scream about how Donald Trump is responsible for this new hostile environment.

The poll itself, entitled “Accelerating Acceptance 2018,” is a detailed report of what’s happening, but it’s important to look past the screaming, end-of-the-world headlines and get into the fine print.

No, it’s not “fake news,” as the President loves to tweet, but the headlines are, in fact, quite misleading.

Say what you will about mainstream media, but sensationalism still sells and it still gets a lot of clicks. Once we get past the shouting headlines, the proof is in the pudding. In studying the report, the trends are very obvious. There’s no doubt that the overall climate has changed in the last year, but the polls that this article sources show a little more nuance than the headlines indicate.

The poll itself was a list of several questions. Participants were asked about various levels of discomfort on LGBTQ visibility: in church, seeing a picture of an LGBT co-worker’s wedding picture, learning a family member is LGBT, children placed with an LGBT teacher, LGBT doctors, seeing same-sex couples holding hands, and an LGBT history lesson in school.

This was the first year that all of these categories showed increase discomfort among those polled. Most of them hovered around the 30% mark or lower, and showed reductions since 2014. 2017 showed the first increase in four years.

Overall “uncomfortable” or more was hovering around 49% for a few years. Now it’s at about 51%. This has a lot to do with the Trump administration and the anti-LGBTQ doctrines spewing out of Washington for the last year.

There is, however, one very telling result of the poll. This is the “overall” segment of the statistics. In this section, non-LGBTQ people were categorized in three groups: Allies, Detached Supporters, and Resisters.

40% of the country has some level of overall discomfort about LGBT people.

The largest jump was seen in those uncomfortable with LGBT history taught in schools. This shows the greatest challenge, and the most important point in the entire study: education.

For years, 14% of the population were categorized as either “very” or “somewhat” uncomfortable in all situations with LGBTQ people. The new poll shows no change in that.

So, we can glean from that, that 14% of the population is going to be a bigot no matter what. Attempting to change such hardened minds is foolhardy, to say the least.

Where the headlines get their “story” is by combining the “Resisters” with the “Detached Supporters” to get 51%, a majority of Americans, that are “anti-LGBTQ.”

Why aren’t we saying that 86% of Americans have some level of comfort with LGBT people instead? The numbers certainly show that, especially since the second group is called “detached supporters,” and not “mildly anti-LGBTQ.” This is where the numbers can easily be shifted based on one’s point of view.

Where do we go from here?

I think the real story is that we have work to do — to help reach that “moveable middle” and encourage them to learn more about who we are and that we’re pretty much awesome. Even if there’s a comfort level they’re not used to yet. And the only way to do that is to educate.

Another critical takeaway from the actual poll is that LGBTQ people are seeing more discrimination than in years past. More than half, 55%, of LGBT people polled have reported being discriminated against. This is a striking and disturbing jump from 44% in 2016.

Yet through all of this, the question of whether or not non-LGBTQ Americans “Strongly” or “Somewhat” agree with the statement, “I support equal rights for the LGBT community” is steady at a whopping 79%.

Studies like this are often distorted by media for sensationalism, but the real story is in the details. A vast majority of Americans support LGBT equality, and it’s constant. The more visible we are, and the more people see that we’re not the monsters that anti-gay hate groups say we are, we’ll see those numbers change significantly.

So … Come out, come out, wherever you are.

This post originally appeared on David’s blog, Skipping to the Piccolo.
Graphs reproduced from the GLAAD/Harris Poll.
[box type=”bio”]

DAVID W. SHELTON is a writer, speaker, publisher, business owner, and activist in the Clarksville, TN area. He’s also served as a pastor. He is a diversity trainer with the Tennessee Equality Project, and author of The Rainbow Kingdom: Christianity & The Homosexual Reconciled