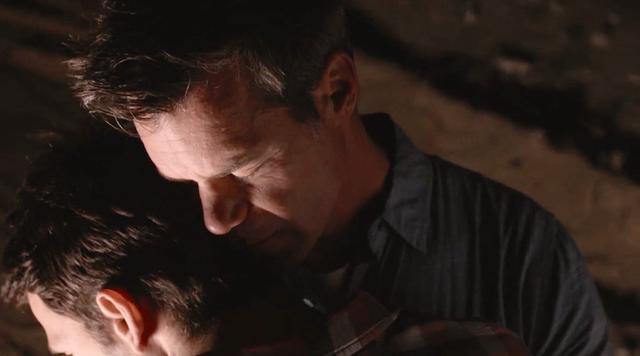 The gay community experiences a lot of loneliness, and we deal with it in different ways. Most of us probably wouldn’t hire an escort to recreate the past, however.

This is exactly what Jonathan (Tuc Watkins) does in the 2016 film Retake, directed by Nick Corporon.

The IMDB synopsis makes it sound much more scandalous than the film is.

A lonely, middle-aged man hires a male prostitute to recreate a road trip from his past.

Jonathan, a middle-aged man, goes looking for male escorts for some roleplay fun — but not just the kind of fun you’re probably thinking about. The first guy he finds isn’t into the game, but the second one, Adam (Devon Graye), goes along with it, intrigued. After one night, Jonathan makes an interesting proposition: that Adam accompany him on a trip to the Grand Canyon without asking questions, and that he answer to the name Brandon.

Jonathan asks Adam to wear Brandon’s clothes and he asks him to pose for photos in the same positions as this mysterious Brandon from the past. He doesn’t want Adam to ask any questions, but as I watched, I was full of them.

What are those Polaroid photos Jonathan carries around? Why is Adam going along with it? Who is he? Is he a hustler? Does he hope to change Jonathan?

Another question I found myself asking was “Is this Vertigo?” Does Jonathan have sinister motives, or is he just a man grieving for a lost love? Just how creepy is he? (Answer: He isn’t as creepy as Dr. Pierce Dorman, his infamous General Hospital character from the 1990s, nor is he anywhere near as fun as Bob or his One Life to Live character David Vickers.) Viewers are kept wondering until the end of the film to fully understand what his game is. Something about the film connected with me, and kept me holding on, watching. Maybe it was because it was a road trip movie, and I love being on the road. Maybe it was my desire to live in the past and have things as they once were while trying to accept that I should live in the present. Maybe it was just because both actors did a great job and are easy on the eyes.

As much as I was captivated by it, this movie won’t be everyone’s cup of tea. It doesn’t end with everything tied up in a nice bow. A part of me wanted Jonathan to fall for Adam as Adam and to finally be able to move on from Brandon.

However, it’s just not that sort of movie.

It’s a movie about how someone deals with grief and pain, a movie about accepting life’s events, and a movie about loneliness and trying to cope when life just doesn’t go the way you want it to.

Retake has a 6.0 rating on IMDB. I rated it an 8. It is something different than your typical gay film. It isn’t about coming out, no one dies from AIDS, and it isn’t a cheesy romantic comedy (which, okay, I do enjoy most of the time, I must admit).  But it shows how far acceptance of gays has come when films begin to show us as more complex characters and not the usual stereotypes.

Ultimately, the film is like a holding up a mirror to our souls, reflecting the loneliness so many of us feel. Most of us won’t find ourselves going to the lengths that Jonathan does in the movie, but many people will be able to relate to the pain of being alone, missing the one that got away, or the ending of a relationship that had to end.

If you enjoyed this post, please support the work of IMPACT Magazine.
Bringing you the best in independent LGBTQ writing on life & faith.

PAUL ALLEN HAKER, Pablo to his friends, is a thirtysomething English teacher and writer who lives in Valencia on the Mediterranean Coast in Spain. Constantly searching for deeper meaning in life, Pablo spends most of his money on travelling and learning languages (he speaks English, Spanish, Catalan, and Italian). When he’s not teaching, at the gym, travelling or watching films, he can be found working on his novel or reading at a café.

Pablo is also Arts & Entertainment Editor for IMPACT Magazine. Keep up with his travels and writing at SetMeravelles.com.