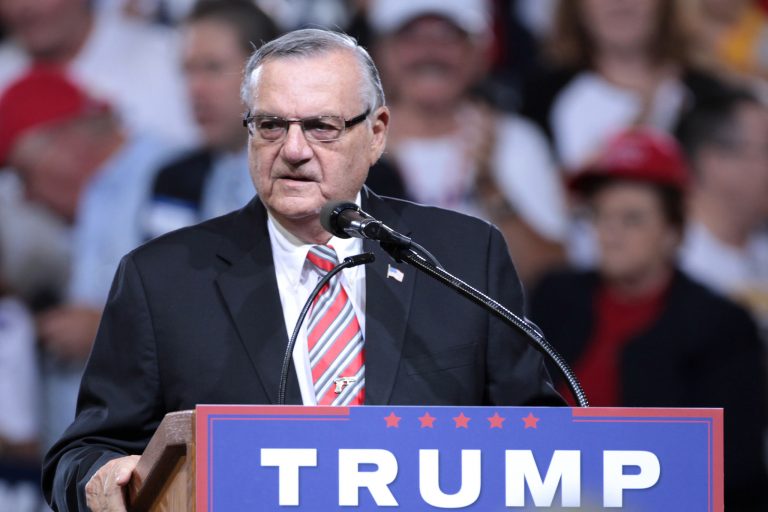 Trump, Arpaio, and the God Who Sees On Friday, August 25, while the nation watched as an increasingly more powerful hurricane barreled towards the Gulf Coast, Donald Trump released two controversial directives aimed at vulnerable communities in our country: the ban on transgender people serving in the armed forces and the pardon of Maricopa County Sheriff Joe Arpaio.

As a cisgender man, I cannot speak to the experience of my trans friends and colleagues, but as a Latino I can imagine that some of their feelings were similar to mine at the pardon of Arpaio – the feeling of justice denied, of being rendered invisible and inconsequential by one’s own government, the sense of being targeted.

I do not want to waste space reciting the long litany of Arpaio’s moral and legal offenses. A quick Google search can reveal how he mismanaged funds, tortured prisoners, ignored hundreds of reports of child sexual abuse, and targeted individuals who criticized him with bogus investigations.

What finally brought him before a federal court was the systemic racial profiling of the Latinx community for arrest and detention. He was found in contempt of court several times between 2015 and July of this year for failing to end his practice of detaining Latinx people without charge. It was at this point, before sentencing, that Trump stepped in to pardon Arpaio, effectively placing his stamp of approval on the sheriff’s misdeeds and giving the Latinx community and the judicial system the middle finger.

I could feel myself reeling at the news. Sadness, helplessness, and rage filled me. Another checkmark in a long list of blatant hatred from this man towards marginalized communities of Muslims, African-Americans, Jews, LGBTQ, and Native Americans. On the heels of his defiant defense of his comments after Charlottesville, it has become more obvious that Trump’s administration has sided with the forces of white supremacy and nationalism, supported by the conservative religious voices who have preferred the power of Empire to the service of the Gospel.

As I scan the comments of my friends who come from Mexican, Puerto Rican, Colombian, Peruvian, and other Latin American backgrounds, I see that same sense of anger and sadness that I experience. Many are people of faith. Who will see us when our government renders our rights and dignity invisible?

In Exodus 3, Moses, having fled the Pharaoh into the desert, meets the God of the Hebrews. I know many people who like to focus on the burning bush or the great “I Am” statement. But for me, verse 7 stands out:

“Then the Lord said, “I have SEEN the misery of my people who are in Egypt; I have HEARD their cry on account of their taskmasters. Indeed, I KNOW their sufferings…”

Imperial power commodifies the marginalized. Like the Hebrew people who were used as slaves to build Pharaoh’s monuments, marginalized people today are used for service — to pick crops, nanny children, or entertain the masses in sport and media. Yet the moment they stand up for their rights – or kneel down – they are, in one way or another, made invisible.

…and God knows the suffering of God’s people.

What’s more, this knowing is not simply the academic knowing of a fact – like 2+2=4. The verb used here is related to the “biblical” sense of knowing as readers of the King James Bible will understand. It is used of intimacy, of sexual relationship, a knowing through experience. God does not simply know the suffering of the people. God KNOWS it. As Christians, we see that in Jesus, a one-time refugee who was arrested and detained without charge, who was tortured by his jailers, who was executed by an indifferent State to make an example of those who would speak out for the voiceless.

Christian devotion in Latin America (and as the second largest Spanish-speaking country in the New World I include the US) has repeatedly resurrected this theme of the God who sees and knows and acts.

In a continent where indigenous, African, creole, and other people have been used and abused by imperial and nationalist powers, their faith in the God Who Sees butts up against the god of power and wealth with which the Churches have often sided alongside the government. In 1531, a decade after the Spanish conquest of the Aztecs, the Virgin Mary appeared to a poor Indian on a hilltop outside the Mexican metropolis. Mary, with bronze skin and black hair, expectant on this Advent morn with the Christ Child, said to him, “I am your merciful mother, to you, and to all the inhabitants on this land and all the rest who love me, invoke and confide in me; listen there to their lamentations, and remedy all their miseries, afflictions and sorrows.”

The Cuban devotion to Caridad del Cobre began in the seventeenth century, claiming that the Virgin Mary rescued two indigenous brothers and an African slave during a storm at sea. For Africans in Cuba, her yellow cloak and association with the waters echoed the Yoruba orisha, Oshún, who exemplifies beautify, sweetness, and life-giving.

And on and on we see it throughout the continent; the God who sees, and hears, and knows.

Many of these Marian apparitions are versions of the Woman Clothed with the Sun from Revelation 12, whose newborn Child is threatened by the dragon that symbolizes imperial might. Rather than a book of future events that Christian pop culture and bad theology imagines, Revelation is a coded anti-Roman tract and looks to the judgment of God on imperial power and the triumph of the non-violent Lamb. But it reminds us that in the meantime, the Empire will have its way:

“Then the dragon was angry with the woman, and went off to make war on the rest of her children, those who keep the commandments of God and hold the testimony of Jesus”  (Rev 12:17).

Its victims cry out to God under from under the heavenly altar, “Sovereign Lord, holy and true, how long will it be before you judge and avenge our blood on the inhabitants of the earth?”  (Rev 6:10). We echo that cry for justice when governments and churches conspire to maintain power over others and render invisible and silent those whom they decide are expendable or threats to their way of life.

It brings us to the present moment.

What are the organs of seeing, hearing, or knowing but eyes, ears, mind, and heart?

Amid injustice, racism, transphobia, misogyny, and militaristic nationalism, the Body of Christ is the instrument through which God will act in the world. Until Christ returns we must be the fulfillment of the Burning Bush, of Guadalupe, or Oshún. Make no mistake that God still sees and hears. A few years ago, a life size statue of the crucified Christ was discovered on a sandbar by Border Patrol on the Río Grande. Unable to find the original owner (who would carry a life-sized statue across the border?), the Border Patrol donated it to a local church where the Christ of the Undocumented continues to attract the prayers and hopes of the faithful who know full well on whose side God is acting.

As we take comfort that the Trumps and Arpaios of the world will not have the last word, we must not let the despair of the times paralyze us. We practice self-care and then we act. In the words of Teresa of Ávila:

To that end we – and especially those who benefit from gender, sexual, religious, or racial privilege– must be willing to see the injustices of world, to hear the cries of the oppressed, and to enter into intimacy with our neighbors to know the pain they feel.

Yet this will only be the beginning, for the call to confront evil and act towards the liberation of all peoples is the greater task that lies before us.

JOEL CRUZ is an adjunct professor of theology and history at the Lutheran School of Theology at Chicago. He earned a PhD and ThM from LSTC in World Christianity and Mission as well as a Masters in Church History from Gordon-Conwell Theological Seminary.

Dr. Cruz is a member of Holy Trinity Lutheran Church in Chicago and is the author of several articles and books, including The Histories of the Latin American Church: A Handbook

(Fortress Press, 2014). He is currently working on his next book, a theology of the 17th-century Mexican nun, Sor Juana Ines de la Cruz.
[/box]