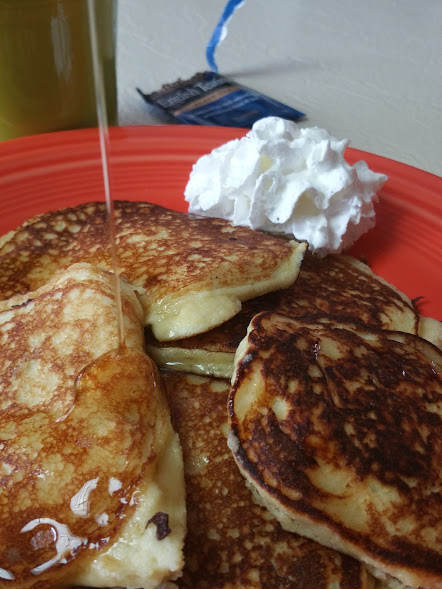 It’s hard to write when you’re full. And that’s one thing these coconut pancakes do: fill you up. It’s all the fiber in them, I think. But they’re tasty, easy to make — and grain-free.

So here’s how this little adventure started out.

I love my carbs. Pastas, pancakes, pastries, crusty French bread… They’re the stuff of life. They’re also not great for someone keeping an eye on their blood sugars and lipids.

So I’ve been deliberately cutting out foods with added sugars, and consciously adding more fiber to my diet. (I quietly mutter “Sugar equals death” under my breath when I’m tempted by my favorite pastries, but you know, it kinda spooks the other customers in line, so I just wander away sad and unsatisfied, but feeling just a little bit superior.)

Anyway. I’ve made the switch to whole-grain everything as part of a lifestyle change. Breads with multi-whole grains, whole wheat flour for cooking, whole wheat spaghetti and pastas, and swapping out quinoa and farro (it’s kinda like corn) instead of rice as a side dish staple. All in all, a healthier exchange, since it upped my protein and fiber intake and reduced my net carbs.

But sometimes you just want a stack of pancakes for breakfast Saturday morning.

There are some cool recipes out there using buckwheat and barley, some using almond flour, stuff with a lower glycemic index and higher fiber to make you feel full and keep you from that post-sugar-high crash. Some of them seem a bit exotic (and pricey!), with ingredients I’m not likely to use for much else, so they didn’t seem worth the purchase. But, we’re easily influenced by media (at least I am), and I’ve seen a couple of really enticing photos of “paleo-pancakes” on Facebook recently, so I caved. (Not that I can even imagine a caveman whipping up a batch of pancakes, but hey …) 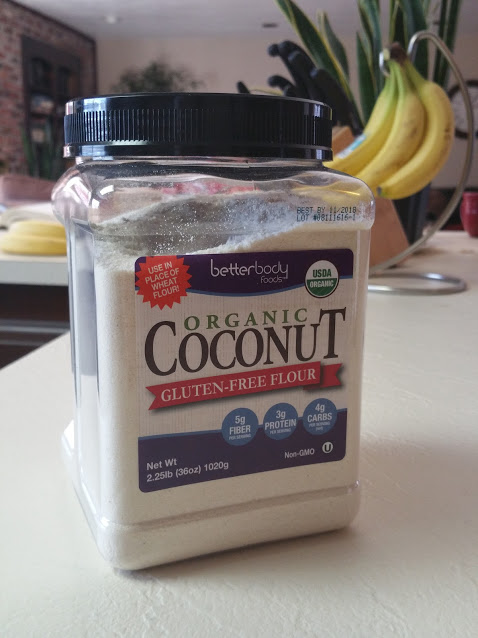 Here’s the killer ingredient: coconut flour. Those crazy Americans. My bud, who lives in Malaysia where coconut is an everyday part of life, never heard of such a thing. Somebody over here, probably with too much time on their hands, thought it might be interesting to grind up coconut flesh and see if bread could be made from it, I guess. And, voila. A flour substance that’s high in fiber, protein, and healthy fats, and lower in carbs than regular wheat flour.

Well, sign me up. So I ran out to my grocery store and picked a 2 pound container. Yes, you can even find it at WallyWorld. I figured if I liked it, I’d try it in other things (imagine with chocolate chip cookies!), so it wouldn’t just sit in my cupboard waiting for the occasional Saturday morning breakfast. And my conscience would be lulled back to sleep when indulging: “don’t worry about it; it’s healthy.”

I did do a bit of background reading, first, before I plunged into experimenting. Turns out, coconut flour is much more absorbant than traditional wheat flour, so it sucks up your recipe liquids (milk, water) leaving your batter a bit thicker. That’s okay. Don’t try to compensate by adding more liquid; your batter will just end up runny. And because it’s gluten-free, you gotta use more eggs as a binder. (Gluten, although it’s gotten a bad rap lately, is the go-to ingredient in wheat that holds all the stuff together when cooking.)* So, you can’t just substitute coconut flour for wheat four 1 for 1. Turns out, it’s more like 1/4 to 1. So, where I used to just whip up pancakes with 1 cup of flour and 1 egg, this time I had to use 1/4 cup coconut flour and 3 eggs.

They taste a bit like coconut, as you might expect, so they have a naturally sweet flavor. Several recipes I compared online added 1-2 tablespoons of sugar (or honey, to stay paleo), but I didn’t think they needed it. Especially if you’re about to pour 1/2 cup of maple syrup over them. One friend recommended adding ground crickets, which would double the protein (he was serious), but I’m not that extreme. Thanks, maybe next time, Shane.

This recipe makes a deceptively small amount of batter. But remember, it’s heavier, so a little bit goes a long way. It’ll make the same number of pancakes as a proportional wheat flour recipe will; the pancakes will just be a bit smaller. But, believe me, they will fill you up. 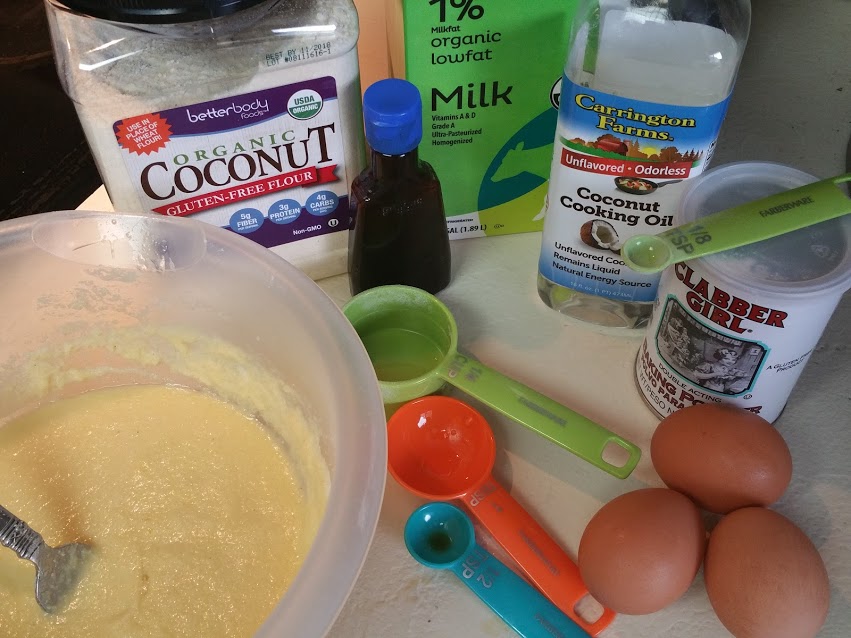 Here’s what you need

1/4 cup coconut flour
1/4 – 1/3 cup milk. (Use coconut milk if you want to stay purely “paleo” and avoid dairy; but I just used my regular 1% cow’s milk)
3 eggs
2 tablespoons vegetable oil (Or use coconut oil if you’ve got it)
1/2 teaspoon vanilla extract
1/4 teaspoon baking powder (This is the stuff that makes the cakes rise — and no, it’s not the same thing as baking soda)
dash of salt (Adds to the chemical reaction to help them rise, plus balances out the flavor a little)

And that’s it. See how easy that is? You’ve probably got all that stuff already in your cupboards — except for the coconut flour, which I’m sure you ran out and picked up, like I did, just to try this out.

Here’s what you do

Basically, you want to mix your wet ingredients first, then add in your dry ones.

So, crack your 3 eggs into a bowl, add the milk, oil, and vanilla extract, and beat with a fork or wisk to combine.
Next, dump in your coconut flour, and add the baking powder and salt.
. It doesn’t have to be perfect; some small lumps are fine.
Heat up a little vegetable or coconut oil, about a tablespoon, in your frying pan or griddle.  I’d avoid the “HI” setting if you don’t want to smoke up the whole kitchen. Just sayin’.
Pour about a 1/4 cup of batter for each pancake (I used the same measuring cup as a ladle). This batter is heavier than normal pancake batter, so it won’t bubble when it’s ready to be flipped like you’re probably used to. You’ll just have to peek at the underside using a spatula/turner and flip when the pancake is a golden brown. I had to flip mine twice to make sure they were cooked through, but you don’t want to overcook them. Nobody likes maple syrup covered hockey pucks. 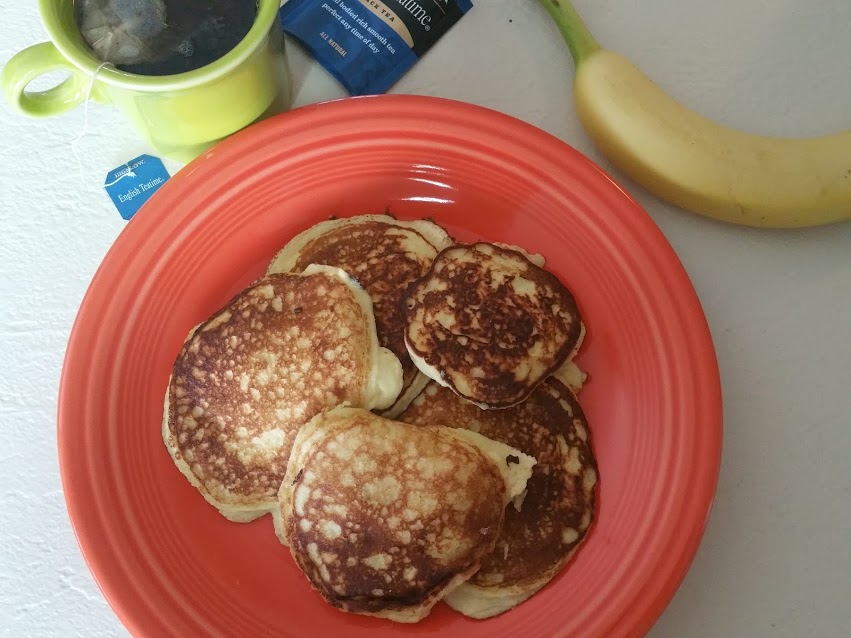 This batch makes about 6 pancakes, 3-4 inches wide — enough for two people if you’ve got other side dishes, and definitely enough for one, with or without extras.

Depending on how much syrup you pour on, these puppies have a much lower carb/sugar count than traditional pancakes. And with just 1/4 cup of coconut flour and the 3 eggs, I estimated about 24g of protein and about 10g fiber.

Not a bad way to start an indulgent weekend. Enjoy!

* P.S.  About using more eggs as a binder, if you have an egg-sensitivity, my friend Rita offered a solution.  You can substitute milled flax seed as the binder. For 1 egg substitute 1 T of milled flax seed and put it into 1 T warm water. Let it sit several minutes until it becomes stretchy. Then add that to the recipe.  I’ll try that out next time I make these …

Hey, if you’ve got a favorite meal that’s your go-to whenever you feel like treating yourself right, and you think it’s easy enough for most guys to prepare, send us your story and the recipe. We’d love to run these “Bachelor Food” posts more often.