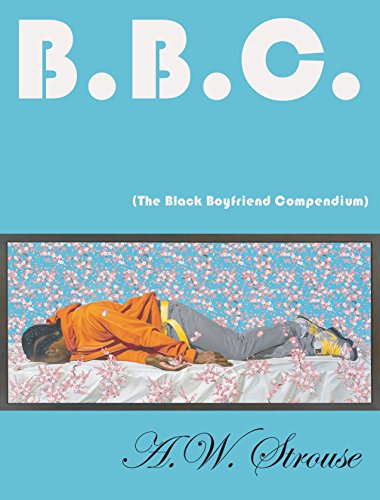 , examines the various (14) black lovers he has had in his life. It was an entertaining read that left me wanting more, in more ways than one.

The narrative recalls some of the negative experiences the writer has had with men, and was partly inspired by Oscar Wilde’s De Profundis. We see the protagonist change from a young, naïve virgin at the beginning, looking for his first experience as a bottom, to an experienced, somewhat jaded yet still hopeful 30-something at the end. He is brutally honest about each of the encounters, which has the effect of luring the reader in, like a witness to a crime scene or traffic accident.

The narrator is likeable yet promiscuous, and there is little mystery why the relationships never work out. It’s a quick, fun read with short sentences and lively language. New York in the 2000s comes alive, and I could easily see the memoir working as a Carrie Bradshaw Sex in the City type, only starring gay black men.

The lovers (or tricks) the narrator finds are sometimes realistic and very human, and at other times come off as stereotypes. There’s Troy, who believes that the HIV medicine AZT gives you full-blown AIDS instead of fighting it, and that Barack Obama was from Nigeria. Marcus is recently fired from a job as a camp counselor and is craving anything with peanuts, which were banned at the camp due to allergies. Keebway and Kilay together would make an awesome boyfriend, but separately make two awful boyfriends.

The sexcapades are provocative yet never cross the line into pornographic. One story in particular raises a good question about possible hidden meaning in a white man being a top to a black bottom.

Another highlight of the memoir is that it raises some interesting points about HIV and STDs in today’s world. In one chapter, the writer finds himself waiting for the results of an HPV test. Another of his encounters is HIV-positive. Condom use is occasionally mentioned. All common scenarios in the contemporary gay dating world.

However, despite all of this, I still found myself expecting more from the book.

From the title, I was sort of wanting to see insight about the experience of being black and gay in current society. The vignettes are all from the white narrator’s point of view. The Amazon synopsis states “he (Strouse) never quite grasps the racism implicit in his tastes—an irony that makes B.B.C. both wickedly crude and bizarrely tender.”

In today’s world, so many app profiles explicitly state “Whites only. No blacks or Asians”. It is refreshing to see a memoir dedicated to a white man’s experiences hooking up with black men. At the same time, as a white man, I can’t begin to speak to how a black reader might receive this book. The title is obviously crafted to elicit a reaction — “B.B.C.” has a distinct meaning in the urban sexual lexicon.

The author is no stranger to controversy and is willing to push the limits to create dialogue. His first piece for IMPACT Magazine in 2012, “A Faithless Revelation,” went through several editorial revisions due to his liberal use of the “f-word”. And in 2015, he wrote My Gay Middle Ages

The author is an intellectual, and as I also consider myself an intellectual, the subtle highbrow style didn’t bother me. However, this memoir obviously will not be received the same in rural America as it will be in urban America. As I mentioned, black readers might have a different reaction. I am still questioning the reasons to specifically focus on black boyfriends. Has he only had black boyfriends? Were his experiences with black men drastically different than his experiences with white men? Does he want to give a voice to gay men of color, to use his white privilege to bring to light the struggles of black men in the gay community? Is he trying to rise above being politically correct? Or is he simply being provocative? I’m not sure.

I admit I’m more of a fan of novels than memoirs, as novels lend more toward deeper exposition. While the point of some of the encounters is that he didn’t know the men very well, I still found myself wanting to explore more into their backstories for some reason.

I think this series of encounters would work better as a blog, as the writing style is succinct and well suited to the Twitter generation, albeit for Twitter members who aim to use lofty language in their 140-character tweets.

The memoir is entertaining, and it does raise interesting questions about society and the dating habits we have created for ourselves. I just wish it made more of a statement about the questions it raises. Maybe that was the point, to make us ask the hard questions for ourselves, and take a closer look at what our generation will leave to history. We currently have marriage equality in the USA as of February 2017, but are we ever going to actually get married when the dating world is so crazy?

None of the questions I have were really answered, but I enjoyed the ride Strouse took me on during the course of this quick-read memoir.

is available for Kindle at Amazon.com

PAUL ALLEN HAKER, Pablo to his friends, is a thirtysomething English teacher and writer who lives in Valencia on the Mediterranean Coast in Spain. Constantly searching for deeper meaning in life, Pablo spends most of his money on travelling and learning languages (he speaks English, Spanish, Catalan, and Italian). When he’s not teaching, at the gym, travelling or watching films, he can be found working on his novel or reading at a café.

Pablo is also Arts & Entertainment Editor for IMPACT Magazine. Keep up with his travels and writing at SetMeravelles.com.