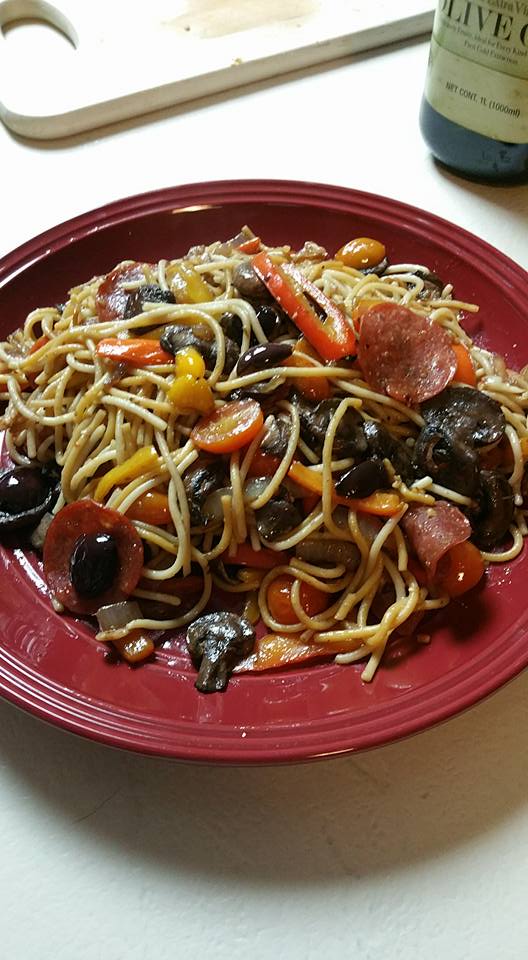 It’s been a while since we’ve run a foodie post, but the other day when I posted a photo of my dinner on Facebook (yeah, I’m one of those people), a bachelor friend commented that he doesn’t know how to cook and wished I’d posted the recipe along with the photo. So, for you, Jay, here it is.

I’ve been a spaghetti fan since I was a kid. And it’s one of the handful of foods that almost every guy knows how to cook. No big recipe needed, no elaborate culinary planning or advanced shopping needed. Most of us have boxes of spaghetti and jars of sauce in our cupboards, and it’s not much more complicated than boiling water and dumping the pasta in. But after a while, that can get pretty monotonous. I’d begun mixing it up, swapping out tomato sauce for olive oil, using stir-fried vegetables instead of hamburger, and the evolution began. Lots of combinations. I eventually got it down to a savory concoction that I really liked, and made it almost every week for myself.

I didn’t realize it was ridiculously close to a traditional favorite until one evening when I was watching an episode of “Queer as Folk” on Netflix, and Michael’s mom, Debbie Novotny, invited Michael’s chiropractor boyfriend to join them for dinner. “Sit down. I made Puttanesca.” Recognizing it as another spin on my favorite pasta, I decided to look it up on the interwebs. Basically, it’s spaghetti with kalamata olives and capers, mixed in a base of olive oil flavored with hot red peppers, garlic, and anchovies. It’s spicy and fragrant, and if you do it right, it should smell up your whole apartment.

In fact, that’s kinda how the pasta got it’s name. It literally means “pasta of the prostitutes” (we all know the word, puta, right? Well, the Italian version is puttana.) Urban legend has it that ladies of the evening in Naples would lure clients to their doors by sauteing the ingredients in olive oil. The pungent aroma would attract hungry men … and paying customers could satisfy their hunger in multiple ways.

The basic recipe calls for kalamata olives, capers, red pepper flakes, anchovies (or anchovy paste), a few chopped tomatoes, and served with Pecorino Romano or Parmesan cheese. I’m not a fan (at all) of anchovies, and most of us probably don’t keep capers in our fridge, so I made a few substitutions. Here’s my bachelor version … 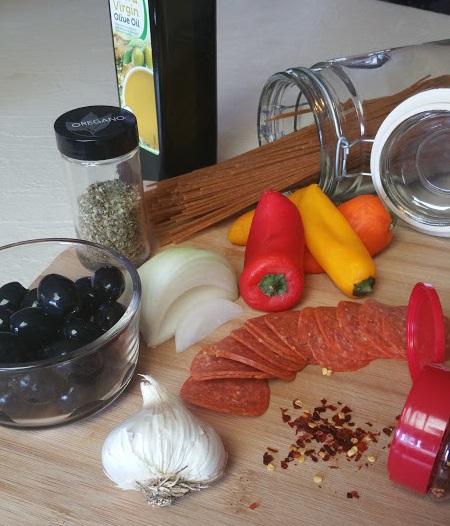 Okay, these last two items are what I substitute for the anchovies and capers to give the pasta it’s “earthy” and salty kick.

Here’s what you do

1. Boil about 2 quarts of water in a saucepan. Add a little salt (which apparently is always the thing to do when cooking pasta) — say, about half a teaspoon. Throw in your dried spaghetti. The traditional standard for one serving of spaghetti is about the diameter of a U.S. quarter — just under an inch. So grab a bunch, and give it your best guess.

2. While your pasta is cooking, finely chop up your garlic, and slice your onions (and peppers).

3. Heat 4 or so tablespoons of olive oil in a skillet over medium heat. You don’t want the heat too high or you’ll smoke up the place.

4. Add 1/4 – 1/2 teaspoon of the red pepper flakes to the olive oil (depending on how hot you like it), along with your dried oregano or herbs. Toss in your chopped garlic, and cook for about 5 minutes or until it’s slightly golden. The idea is to infuse the oil with the spicy heat from the pepper flakes, garlic and herbs.

5. Next, throw in your sliced onion, peppers, olives, mushrooms and pepperoni. (If you’ve got capers, you could add a teaspoon of them here.) They’ll saute in the flavored oil, about 5 minutes.

6. Once the vegs have cooked in the skillet, stir in the canned tomatoes, and bring to a low simmer.

7. By now, your spaghetti should be about cooked. You can test it by pulling out a few strands and chewing on them to see if they’re the firmness you prefer. Most recipes say till al dente — slightly firm — but I prefer it a bit softer. Umm, do I need to say NOT to use your fingers when fishing the pasta out of the boiling water? 8. Using tongs or a pasta ladle, transfer the spaghetti from the water into the skillet. This will allow just a bit of the starchy cooking water to mix in with your sauce. Mix it all together until the pasta is well coated and your vegetables are evenly distributed. (I always end up adding more olive oil at this stage, but you may not like it as oily.)

9. Pile a generous amount on your plate, and top it off with some grated cheese.

Feel free to tweak the recipe to suit you. If you really like a salty tang, try adding a few finely chopped anchovy fillets (or 1-2 teaspoons of anchovy paste) as the original recipe calls for. Some of my friends swear by it — “It’s not puttanesca without the anchovies!” Me? I prefer the mushrooms. You be the judge.

Now, go dig up “Queer as Folk” on Netflix (the American version, not the British), and have yourself a relaxing evening. See you in Pittsburgh.

Hey, if you’ve got a favorite meal that’s your go-to whenever you feel like treating yourself right, and you think it’s easy enough for most guys to prepare, send us your story and the recipe. We’d love to run these “Bachelor Food” posts more often.