Please, Don’t Invite Someone to Church This Month 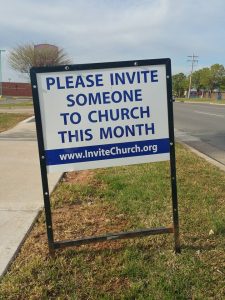 We’ve got some big problems in the Church these days. That’s no great revelation. Just ask anybody on the street what they think of Christianity, especially during election season, and you’ll get an earful.  We hear it so often, in fact, that we in the Church turn a deaf ear to it. We tune it out. We’re callous to criticism. And we just go on our merry way, carrying on as good soldiers of the Cross. Well, at least on Sundays.

So when I drove by this sign stuck lazily in the ground by the side of the road, insisting I “invite someone to church this month,” all I could do was shake my head in wonder and dismay.

That lawn sign for me, with its tone of religious obligation, was an all-too-accurate metaphor of American churchianity. Stuck in the ground so half-heartedly that the person couldn’t even bother to push it in all the way.

And it leaves me with this one begging question: “Why?”

Why should I invite someone to church?

At the core of my cynical reaction to the sign is the doubt that it would make a single bit of difference in a person’s life.  Of course there are churches out there that are legitimately changing the world, making a difference, with their people walking out the church doors and impacting lives around them in love and compassion and even power. But realistically, they are few and far, far in between.

Let’s get real for a minute. The current mass exodus from mainstream Christianity isn’t because people aren’t showing up to church on Sunday; it’s not because church-goers aren’t inviting others. It’s because we are showing up, but we’re more often than not walking away just as empty as when we walked in.

… It’s because we expect that pastor and the staff to do God’s work. We’re just there to be fed.

… It’s because our own encounter with God is too often limited to those 20 minutes of praise and worship once a week.

… It’s because we hear sermons week after week laden with guilt-inducing messages about how wretched we are, how we need to read our bibles more, pray more, and yes, invite people to church more, and how if it weren’t for the unmerited mercy of God, we’d all be doomed to hell.

… It’s because we good and faithful church-goers, singing hymns about amazing grace and love, pour out of the building at noon every Sunday and head to our favorite buffet — and then gripe at the servers. And leave lousy tips.

… It’s because on that eventful Sunday when the guest we invite does show up, she hears about a Jesus who probably wouldn’t even be welcome in our building. The guy who talked about giving up our wealth, who talked about loving our enemy — and not just in some warm-fuzzy way, but in wallet-emptying ways: feeding and clothing the poor, caring for the homeless, visiting (helping!) the sick who can’t afford medical care. That guy, Jesus, would never be offered the pulpit. His gospel would be too demanding, and he would likely be quietly ushered out the back. Not a good candidate for our country-club Christian comfort zones.

People aren’t coming to church … because we good and faithful church-goers, singing hymns about amazing grace and love, pour out of the building at noon every Sunday and head to our favorite buffet — and then gripe at the servers. And leave lousy tips..

… It’s because all those good words read out of the Good Book bear little resemblance to the anti-gay, anti-woman, anti-immigrant political propaganda coming out of so many preachers doing their best to defend “traditional American values” instead of “Jesus values.”

… It’s because going to church and declaring our faith has become the defining expresssion of what it means to be Christian these days, instead of how we live our lives and treat others during the rest of the week.

And honestly, if a new person did walk through our doors, would they meet God in our eyes and arms, or are they just supposed to absorb God from the singing and prayers offered? “You won’t leave here like you came, in Jesus’ name.” Lord, I wish that were true.

So, stick that sign out by the side of the road; let’s invite someone to church this month. Not even this week – don’t knock yourself out. Just any ole time this month will be just fine. Let’s fill these pews. Pack this place. Cuz that’s what this world really needs.

Instead, why don’t we invite the church out to the world this month?

How about instead of focusing on church Sunday morning, we come out Saturday night to offer warm soup on the street corner to the hookers? Or to hand out McDonald’s gift cards to those guys living under the overpass so they can have a hot meal for once this month, instead of having to beg for change or dig through trash?  Or how about we go down to the gay strip, and instead of passing out tracts trying to get people saved, offer them free bottled water or BBQ sandwiches to cut the alcohol in their system so they can drive home safely? Or maybe even pull an extra $20 bill out of our Gucci wallets and Michael Kors bags to help finance that shelter for homeless youth?

Let’s set aside for the moment the suggestion that we actually volunteer at the county jail or state pen in some program to benefit the prisoners, or to go up to the hospital and just hold the hand of our fellow church member who’s alone and afraid. That’s too hard. (Hey, I don’t do that either — so I’m not just throwing stones at others here.) I won’t ask that we actually participate in that Soup Kitchen on a regular basis, as part of habitually walking out our Christian beliefs.

It’s hard enough getting people just to step out of their — our — self-absorbed lives long enough to smile at the cashier at Walmart. Oh sure, we’ll say “Have a blessed day,” but exercising just a bit of patience when that cashier is having a hard time with her register and making us wait in line too long — that’s just a bit too much effort.

Invite someone to church this month? No thanks. At least not until the church we’re inviting them to is actually doing something outside the building on days other than Sunday. Not until we who go week after week are actually being changed, transformed, by those good words. Not until we show that we actually care about the people around us, until a little light actually shines from us in this dark place we call urban America.

When churchianity becomes authentic Christianity, when we’re doing some legitimate Jesus-following, we won’t have to invite someone to a service this month. And we won’t need signs to remind us. People will be knocking on our doors wanting what we have.

But until we have it, please. Please. Don’t invite someone. We’ve got enough church-goers in this country already.

This post is from Steve’s personal blog, Cafe Inspirado.