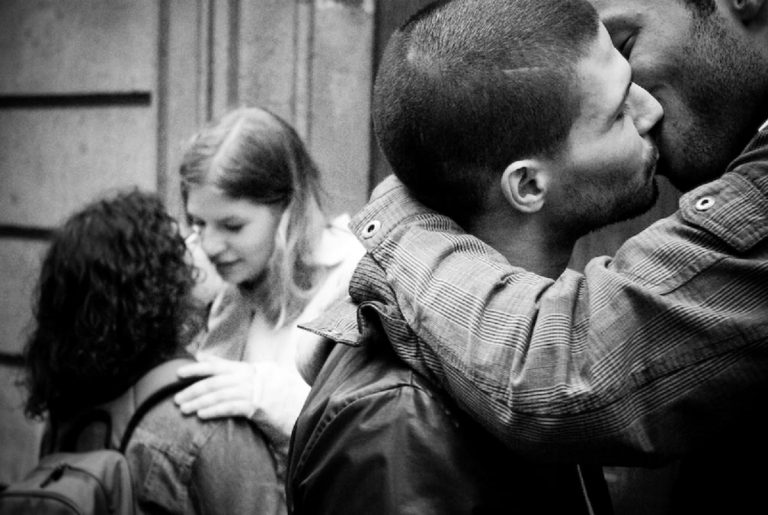 Is It In His Eyes? You see a guy and you say to your friend, “He’s so fine;” a girl walks by and you think, “Wish she were mine.” You like that she’s shy, or that he’s a soft-spoken guy. Do-lang, do-lang, you fall. He’s the one you dream of. She looks into your eyes and takes you to the clouds above. You fall in love whenever you meet, and say a prayer with every heartbeat. But how can you tell if it’s real? Is it in his eyes? In her face? His warm embrace? How ‘bout the way she acts? No, no. You’ll be deceived. If you wanna know if they love you so, it’s in their kiss.

A quick look at pop culture shows how important we think attraction is. Read the Song of Songs and you’ll find that we’re not the only ones who think so. Attraction matters, and yet it is difficult to define. It can fool us. Anyone who has ever been in the dating pool knows both its value and its perils. To wade those waters with confidence, we must think not only of what we like, but why we like it. It requires foresight, knowing that physical and even mental attributes fade with time. And as with everything else in marriage and relationship, we must be willing to take risks and embrace new adventures.

The best metaphor I’ve ever heard for attraction was developed by David. We were on the topic once, long before we started dating, and he posited that the kind of attraction that lasts is like a stew cooked over a slow fire. Its scents and flavors develop and change with time. The strength of one ingredient fades, as another’s rises. You throw in flavors that you wouldn’t like on their own, but combined with the rest, the result is balanced and sublime.

I like this imagery because it implies the passing of time—it recognizes that the carnal desire you may feel for someone now will become nuanced and even secondary as you develop relationship over the years. It also highlights the importance of discerning ingredients: If you know you’re allergic to peanuts, you shouldn’t put them in your stew, but there’s no reason to skip the za’atar just because you’ve never heard of it. And no matter how much you love sugar, you might realize that the stew doesn’t need it and that you don’t really miss it.

“DON’T PIN ALL YOUR DESIRE FOR A PERSON ON JUST ONE ASPECT OF THEM. LONG-LASTING ATTRACTION IS A CONFLUENCE OF BODY, MIND, AND SPIRIT.”

Attraction is not the foundation of a relationship, and it’s not what holds it together. That is accomplished by shared values and love. But it does matter. It’s necessary. If attraction weren’t important, a clueless straight bro who has no idea how to treat women could just marry a dude and be perfectly happy. You must be physically and mentally drawn to a person in order to truly give yourself to them. Absent that je ne sais quoi that makes you captive, you’ll always feel tempted to run.

In a dating pool as small as that of gay Christians, the question of attraction causes a great deal of angst and no small amount of grief. The story goes something like this:

Joe meets Pete. Joe thinks Pete’s a great guy; they have great conversations; they have similar histories; they even like the same style of worship. But Joe doesn’t find Pete physically attractive. Joe agonizes over whether they should date; he wonders if he’s being shallow, but he’s afraid of settling. His gut tells him this isn’t gonna work, but his brain tells him, “You found a Christian guy, now shut up and be grateful.” So he leads Pete on, all the while hoping a better match will come along.

Pete, on the other hand, thinks Joe is the most handsome guy he’s ever seen. He falls in love. He doesn’t go on any dates, and makes no effort to meet new people. He gets stuck. He convinces himself that Joe’s “the one;” that no one can be as handsome, as compatible, as good for him, or as good a Christian as Joe. Then the bubble bursts, hearts break, and jadedness creeps in.

This is a universal drama, whether the characters are Joe and Pete or Jane and Paul. So how much weight do you lend to attraction, and how do you measure it to begin with? Let’s go back to David’s stew. If you’re hoping to find a life partner, get to know yourself first. Discover your allergies, and don’t apologize for them—if there’s a physical trait or personality characteristic that absolutely puts you off, don’t set yourself up for failure by dating someone with that quality. (Just make sure you’re not finding deal breakers with everyone you meet, because that’s probably a sign that you still have some work left to do on your own self.) Don’t reject ingredients you haven’t tried—be open to unveiling new characteristics about people that you didn’t know you could find attractive. And be prepared to leave some flavors you like out of the mix—you may well love brunettes, but you might find that a blonde can make you just as happy.

Remember that the stew’s flavors will subtly change. People change. An extrovert can become more of an introvert with age. Abs get harder to maintain, and wrinkles impossible to avoid. Even memory and the ability to converse can fade with time. So don’t pin all your desire for a person on just one aspect of them. Long-lasting attraction is a confluence of body, mind, and spirit.

CONSTANTINO DURAN studied philosophy, classics, and all things American. He practiced journalism in various forms for over a decade. At age 19, he first read Ayn Rand, and by 20, he was a staunch atheist. He came out of the closet around the same time, and made a life on the East Coast. In the summer of 2011 he left his home in Manhattan, and walked to Alabama. He spent the following year traveling across the United States, and somewhere along the way, he began to pray. He fell in love with the 33-year-old carpenter who died for our salvation, and he is surprised every day by the grace the Lord has shown him.

He is engaged to David Khalaf, and they live in Portland, OR.  Together they write Modern Kinship, a blog where they document their journey toward holy union as gay Christians. You can also follow them on Twitter @daveandtino