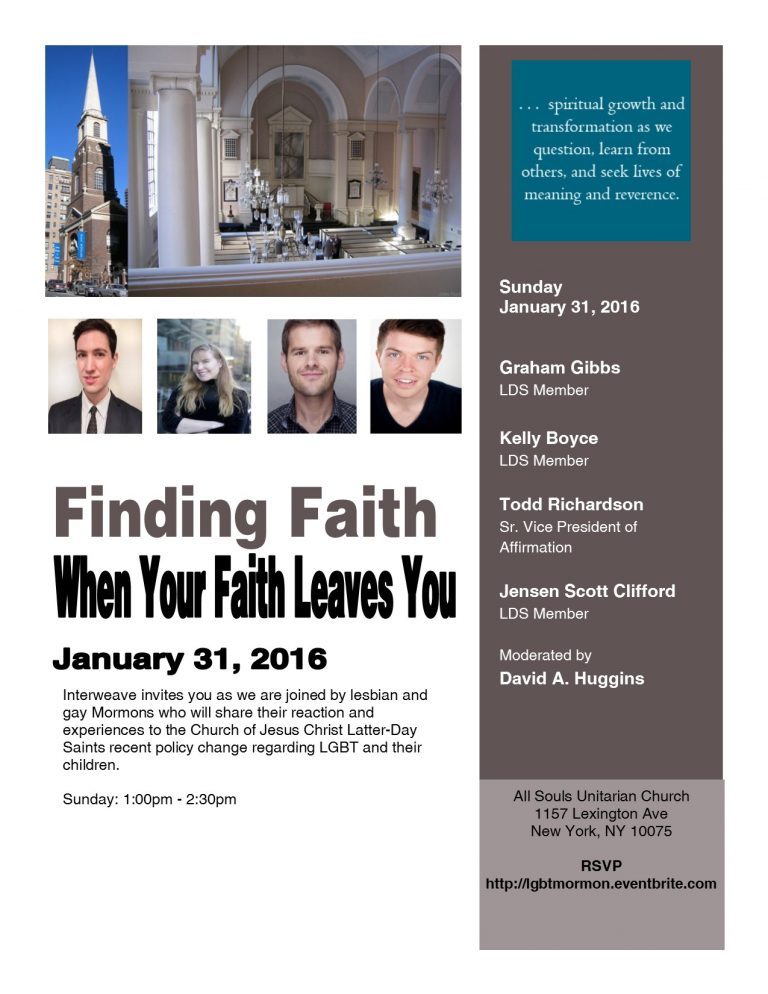 The All Souls Unitarian Church, in New York, NY,  will host a panel discussion with gay and lesbian Latter-Day Saint (LDS) members on Sunday, January 31 at 1pm. The title of the panel is “Finding Faith When Your Faith Leaves You.” The four panelists include Affirmation senior vice president, Todd Richardson, and three LDS lesbian and gay members Kelly Boyce, Graham Gibbs, and Jensen Clifford.

The panel discussion is being organized by All Soul’s Interweave-LGBT and is being moderated by Interweave officer, David Huggins.

“We want All Souls to be a place for any LGBT person of faith to be able to discuss challenges and experiences with their current and past religious or spiritual community without feeling judged,” says Laura Manos-Hey, an Interweave officer.

“The LDS church’s policy change has deeply affected many Mormons, LGBTQ and straight alike,” says Todd Richardson. “It has caused many to reevaluate their place in the Mormon fold. Feelings of confusion, hurt, and anger abound.”

LGBT Mormons face many pressing concerns.  Being an LGBT person in the Mormon faith, raising children in the Mormon faith, identifying with a religion that excludes, and maintaining family ties with devote Mormons are some of the concerns the membership change has created. The panel offers personal experiences of the LDS Church’s policy change as well as ask “where do we go from here?”

All Souls is a Welcoming Congregation

All Souls strives to involve its members in the general life of the congregation and does not segregate LGBT people from the church’s larger scope of activities. It is a consistent presence in the church and provides support to bisexual, gay, lesbian, and transgender persons regardless of membership or faith affiliation.

Affirmation: A Resource for Gay and Lesbian Mormons

Affirmation serves the needs of lesbian and gay Mormon women and men, as well as bisexual and transgender LDS and their supportive family and friends, through social and educational activities.

Affirmation’s participation in community panels is one way of creating awareness about LGBT issues within the LDS community. Information about Affirmation can be found on the website at http://affirmation.org/