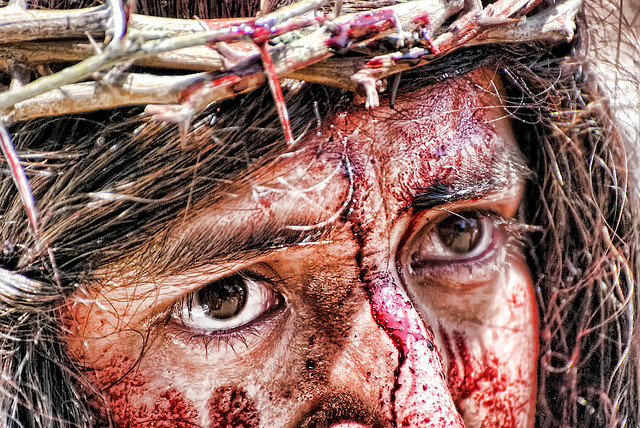 The (Female) Jesus I Saw this Sunday Palm Sunday was a few days ago, the first day of the most powerful and important week in the church year. In liturgical traditions, the service opens with joyful singing and the waving of palms, and progresses into a reading of the Passion.

The account in Mark’s gospel begins with a woman from Bethany lavishing Jesus with love and costly nard, but then it takes an ugly turn to Judas’ betrayal, the disciples falling asleep in the garden, Peter’s denial, and finally humiliation, brutality, and death. The scenes are intense, and the reading of the narrative is tricky. In my old, conservative church, men on the rector’s council were the only people participating in the reading, with Jesus played by the priest himself. The priest was a close friend, and a wonderful orator and teacher, but a horrible reader. His pacing was bad, and the emotion he attempted to introduce just didn’t carry. His Australian accent sounded inexplicably cheerful throughout, which furthered listener confusion. Other participants had varying levels of success in executing their own parts, and the annual event ended up being torturous rather than powerful. But since the readers had body parts that matched the scriptural characters’, all was theoretically right with the world.

In 2012 I attended my first service in which roles were played by women. Since then I’ve listened as women have read Peter, the high priest, and even Christ himself. I’ve grown accustomed to the practice, but I’ve never felt completely at peace with it.

Until yesterday, when my lovely bride was asked to read the part of Jesus.

She wasn’t particularly comfortable with the role. She balked in fact, knowing that she wouldn’t be able to stand up during the whole thing, and not wanting to draw attention. Feeling embarrassed about having to use a chair. Feeling awkward and uncomfortable at having to go forward on crutches.

But it was beautiful.

A Christian man castigated me online yesterday, calling me a “dirty, perverted, immoral sinner”, and warning that unless I repent of my sins I will burn in a lake of fire. While he was off in his dark corner of the world, typing those words and many more, I watched Dolce sitting before the altar, reading the words of Jesus.

There she was, a woman. But not just a woman, a woman in a same sex marriage. A woman who’s hip has dissolved to such a degree that she can’t walk unaided. A woman who has been persecuted, and who was in extreme pain, and who felt unworthy, exposed, and vulnerable, sitting before the crowd and humbly undertaking the role of he who was persecuted, in pain, exposed, and humiliated.

Despite not looking anything like the smiling, bearded, postcard Jesus, Diane was the closest representative to that man on the cross that I’ve ever seen.

I can hardly wait to see what else this holiest of weeks will bring.