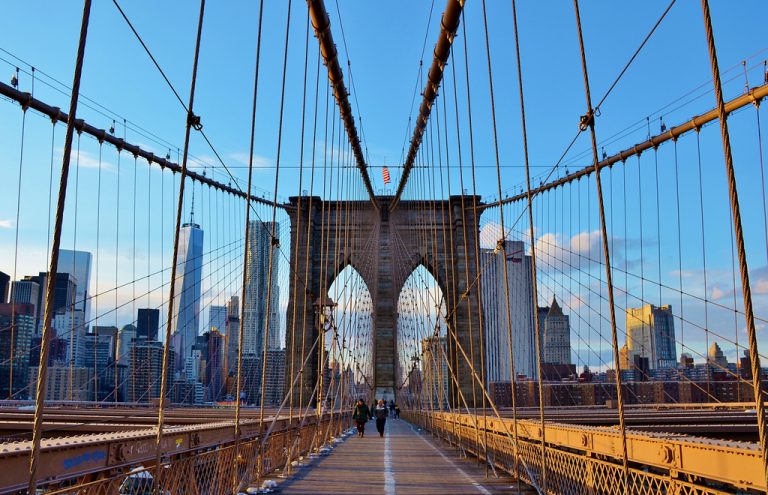 An American Tourist in … NYC

Observations by an excited kid in New York City — Last week, my partner and I took a week’s trip to NYC. It was a great time, and I jotted some notes. Print it off so you can read it later, or read it on your phone … while sitting on the pot, maybe. Enjoy the randomness …

• “Scotty’s Bistro” on Lexington has the best salad platter one can imagine – tuna salad, potato salad, coleslaw (the best slaw ever had – beats mom’s). NY cheesecake to die for, but the piece was way too big for my appetite • “Perfect Pint Irish Pub” on Lexington is a loud, popular, boisterous place to have a Guinness. A table of six loud women, each trying to out-talk all, sure added to the noise din.   • “Chevy’s Fresh Mex” in midtown, on 42nd near 8th Avenue, was a real find. We sat up at the bar and had Happy Hour margaritas for six bucks. Wow, they were good. You could actually taste the tequila in ‘em. The daily Happy Hour is from 2-8pm, sometimes ‘til 10pm, depending on the manager’s mood. A large likable eclectic ambiance that was an immediate hit. Definitely with comfortable gay undertones. Joshua, the bartender, ask for him. We’ll go back. (We did go back a second time. He remembered us.)

• Deli’s are everywhere. Take out, delivery, or eat-in with seating often upstairs on a loft near the front windows. Huge variety of foods. Most we tried were excellent, and convenient. A wonderful apple Danish. A piece of cheesecake is better in NYC than at home. At home you get a piece, there you get a slab. But, you’ve paid a few more coins, too.

• Subways are interesting. The trains run all night. Catching a train early morning gets you the homeless stretched out on the seats, asleep. Minstrels ride the cars almost every trip. A guy will have a guitar, strum and sing, then walk the car with a cup for tips. Some surprisingly good voices. Others ramble a down-and-out story, stick a cup in your face for money. Some get belligerent if you ignore them. But always take the subway rather than a taxi, if you can. Subways far cheaper. Common to see roller bags on runs to JFK or LaGuardia.

• Speaking of prices, yeah, daily prices seem to be close to 50% higher on some things compared to home. It was noticed in restaurants. We stopped at “Uncle Paul’s Pizza Place” on Vanderbilt and 46th for gelatos. Superb! But two servings were nine bucks.

• Getting passports at the Federal Building on Hudson Street at 7am, and the line was around the corner and out of sight.

• Skies are gray, with sprinkles, and cool. Heavy jacket weather —  and it is April. Glad there’s an umbrella handy. Don’t buy the cheapie umbrellas sold on the street corners. They will self-destruct in 45 minutes. Everywhere is seen dark somber clothes. Stylish? Perhaps, but dreary. If someone wears color, it stands out. Maybe it’s deliberate: to blend into the background.

• On the streets in Midtown, and on the subways, one seldom hears English. Such a melting pot. There are so many BMW’s, Audi’s, and Mercedes, they are common place. Taxi cabs are either yellow Camry’s or a yellow Prius. NYC apparently ignored the saying of “Buy American.” Clogged traffic! A car is a liability, not an asset here. Renting a parking space will cost at least $250 a month. And if you want covered parking, it will go up from there.

• Two violins playing classical music in Grand Central Station. Why? New Yorkers are supposed to be on the go and too busy to stop and enjoy the music. Loud applause in the Station. A wedding taking place, he in tux, she in gown. The kiss. Why there? Is that where they met? • The streets will have bikes for rent. They are in racks and one can take from here and leave it over there. Cellphones also everywhere. People walk along oblivious to what is happening on the street, concentrating on their phones. Watched one woman texting, not watching where she was going, and fell right over one of the bike racks. The phone flew. I laughed out loud. She was pissed.

• The Trade Towers Memorial Museum definitely worth the visit. An emotional presentation. We were all remembering where we were that morning. The new Freedom Tower is awesome, rising half-mile into the sky. Mirrored glass. Let’s go up to the top. Tours are $28 each. The line S-snaked to the ticket window with a couple of hundred people waiting. Eh, maybe next time. • Walking across the Brooklyn Bridge was a fun mad house. Every tourist in Manhattan was doing it, and stopping to take photos en route, including us. The skyline is tremendous from mid-bridge looking back at the city. Had lunch in the Brooklyn Bridge Café at the Brooklyn end of the bridge. Quite good after the exercise of the long walk. Is the Brooklyn Bridge Café gay owned? The servers were very ‘understanding’, and several tables with same-sex groups. The “metrosexual man” is seen everywhere on the street, clubs, cafes, so sometimes it’s difficult to tell. Taking the subway back to Manhattan, we took the wrong direction. Rode it all the way to the end. Purely residential, and reminded me of Archie Bunker.

• The Best T-Shirt Department: “Homeless: I Spent My Money in NYC”

• Easter Sunday Mass at St. Patrick’s Cathedral on the corner of 50th and 5th Avenue. Thousands of people both inside and out of the enormous stone monolith. TV screens on every massive column projecting the service in the distance. We did not get into the mass conducted by the Cardinal Dolan as the tickets to his mass sold out. The Mass was an awesome experience. • 5th Avenue was closed to vehicle traffic due to the Easter Parade. It was certainly something else. Hundreds of homemade hats, mostly in spring floral style, some bizarre, some enormous, strolling while posing for photos. Hundreds of dogs in floral costumes also, many with bizarre hats also. What a dog has to put up with to get along with some owners. The Easter Parade is far beyond what I thought it would be. Fifth Avenue has so many House names like Armani, Dolce-Gabana, Valentino, Swarovski, Saks, and since it was after church we stopped for breakfast at Tiffany’s.

• Jackson Heights in Queens: what an active, alive neighborhood! Very international with Colombian, Ecuadorian, Chilean, Peruvian, and to a lesser extent Mexican. Fun bars! Great ambiance. Excellent cafes – try “Cositas Ricas” on Roosevelt Avenue. There are several gay bars in the area, including several in a two-block stretch of Roosevelt Avenue. “Friends,” “True Colors,” and “Evolution” are popular and always busy with bingo, karaoki, underwear contests, and the like. As the neighborhood is predominantly Hispanic, they can be interesting. The subway trains become elevated and rumble overhead, the trains being part of the personality of the area. Such a unique vibrancy to this neighborhood and shopping area.

• Noticed on TV the same two guys in the Sonic commercials. The guy names his peanut shake after this old girlfriend because she was nuts. Seemed funnier away from home.

• On the last day, our first visit ever to the Bronx. Took the train all the way to the end of the line. Didn’t want to get off the train to go down to the street. Didn’t look inviting. Only glowing spots were the Yankee Stadium right next to the tracks. If the train stopped, we could watch the game. The other bright spot was Tracy Towers, modern high-rise condos. The rest of what we saw is run-down, graffiti-covered, depressing. Bronx = been there and done that. Curiosity satisfied.

Visiting the Stonewall Inn in the West Village was an experience almost as emotional this time around as it was when I first visited years ago. This is where it all got started — and now we celebrate.  Taco truck on the corner has good tacos, just saying.

• Wherever you go, whatever time during the day, in Manhattan the masses of people are everywhere. Can’t escape standing in line. Constant noise from loud people, subway rumblings, music blaring, honking horns. A constant crush of people and no escape. Exciting? It sure is, but after awhile, an escape is desired. Far out on Long Island? A Connecticut village? The Jersey Shore?

• We stayed in the Boutique Hotel at Grand Central across from Grand Central Station. An attractive cozy room in an excellent location to walk any direction or to jump on the subway, and a friendly helpful staff. Would stay there again.

I love NYC.  It is almost too overwhelming with the mass of people wherever one goes.  But the amenities are outstanding. Fun, fantastic, frenetic, non-stop, go-go-go. That’s New York. Definitely an invigorating kind of vacation!!

[box type=”bio”]
ZACH MULLANEY is a native of Los Angeles, California, and taught for his career in the city of Huntington Beach. He has always been a traveler, trying to use many of his summers to visit new regions. Retirement took him to a smaller city in the rural ranching area of the central Mexican state of Zacatecas. He now lives with his partner of 20+ years in Oklahoma City. Travel is still an active interest.
[/box]