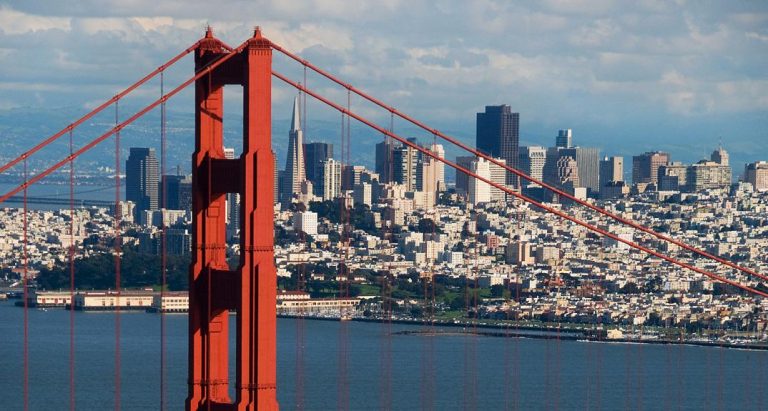 My boyfriend and I just got back from a trip to San Francisco. If you’ve never been, you need to put it on your Bucket List because it’s a beautiful city — and yeah, the Golden Gate Bridge is one of those “must sees” of modern times, kind of one of the modern 7 Wonders of the World. The art and architecture of the city is amazing — we were stopping every couple of streets just to snap photos of the buildings.

We hit all the touristy places, of course: the Port of San Francisco and the Embarcadero, Chinatown, the Japanese Tea Garden in Golden Gate Park, the Bridge, Fisherman’s Wharf … and that place that was gay Mecca for so long, the Castro district. We walked everywhere, just to absorb the city. Miles and miles of hills, up and down. And restaurants, amazing food. (Yeah, we didn’t realize that food would end up being our major expenditure there.) It was Jake’s first time to the city, and my first time back in almost 20 years.

It’s always a bit nostalgic returning to a historic scene, a place loaded with memories and iconic images. San Francisco is such a place. And part of that nostalgia is a bit of sadness over how things have changed over the years. The Castro brought that point to light immediately.

Twenty years ago, I was a grad student visiting the city for my first time. I was still in the closet (mostly), so it was like a trip to the motherland, the safe-haven for gay and lesbian kids seeking refuge from the oppressive environments of small town Kansas … or even upstate New York. The hippy days of Haight-Ashbury were long gone, even by then, but the Castro was still buzzing with gay couples, gay restaurants, gay bookstores, gay clubs. It was a place you could feel “home,” you could be safe … you were among “your own people.” Same-sex marriage was still a fantasy then. We never imagined it would happen in our lifetimes. Being gay in the military — even before the days of Don’t Ask, Don’t Tell — was a risky venture. Movies about people like Sergeant Matlovich, who came out, and was court-martialed and dishonorably discharged, still haunted us. We weren’t too far removed from the days of Anita Bryant, and the rages of Jerry Falwell and the Moral Majority. AIDS was still a plague that ravaged men and women, with little hope in sight. It was a death sentence. So places like San Francisco were little paradises where people could escape the stress and pressures of hiding in real life, where we could let our hair down, hold hands, and just be. But the Castro is a different place now. It’s not much more colorful than any other “cute” part of town. Sure, there are rainbow flags flying everywhere — even the crosswalks are rainbow painted. And yeah, there are drag clubs if you like that kind of nightlife. But for the most part, it’s just a cute little touristy spot, full of restaurants. The bookstores have gone the way of most bookstores these days … extinct, victims of Amazon and the internet. Even the “GLBT Museum” is not much more than two small rooms with photos of a few famous people, like José Sarria and Harvey Milk. Nothing shocking about the place. It’s completely family-friendly — if you don’t count the random homeless people spewing occasional vulgarities.

And it saddened me a little. But this is what evolution looks like.

LGBT men and women fought for this. For integration. For acceptance. For the day when we wouldn’t have to crowd together in comfortable ghettos, where we could live among everyone else, and where straight people would feel just as free and comfortable around us. They dreamed of the day when a lesbian couple could walk down the street pushing a stroller with their child in it, or two gay dads could hold hands while carrying their son on their shoulders. Where you could lean over the table at a restaurant and kiss your spouse in public without people making hateful comments or throwing something. They fought, they protested, they were beaten, some were even assassinated, for “equality” — for “normalcy.” And San Francisco now reflects that.

My boyfriend is younger than me. He lives completely “out,” and has since he was a teenager. His boss knows, his colleagues know, his students knows, his students’ parents know, his priest knows. He experienced rejection in the evangelical church he grew up in, but he doesn’t know how far we’ve come, how mind-blowingly, unimaginably far we’ve progressed. He won’t know the Castro as I once experienced it. And thank God for that.

As disappointed as I was by the change, I recognized that this is the natural outcome of all those fights for civil rights. It was what those drag queens at Stonewall fought the police for.

I have friends even here in Oklahoma City who bemoan the changes occuring in our community. We don’t have a big area like the Castro, or Greenwich Village, or Houston’s Montrose. We have a small stretch on 39th Street known as “the Strip” where there are a handful of clubs and a hotel. Gay Pride draws in thousands of people for the festivities, the music, the beer, the parade — a lot of young LGBT people, but also thousands of straight people who just want to have a good time. Families, kids. And some of my friends don’t like this. “We’ve lost our culture. We’re disappearing.” It’s a shock to our identity. But isn’t this exactly what we wanted? Marriage equality, civil rights, families, job protection … to be treated as if our sexual orientation made little difference except in whom we chose to love? This is evolution. This is progess.

I get it. I feel some of their pain. Probably like the early Christians felt when the persecution stopped and Christianity became a legal religion. They didn’t have to hide anymore, they could be who they were in public. It changed everything. Or like second-generation immigrants who want to move out of Chinatown and work on Wall Street. Or off the reservation and into the cities. Integration. There’s a schizophrenic struggle to retain part of our identity as unique, as special, and yet live the normal lives we’ve always wanted. Seeing straight people dance at our clubs, seeing kids at our Pride parades, seeing less and less of the blatant sexuality displayed at our festivals, as the focus of our lives turn from that to the mundane efforts of paying a mortgage and sending our kids to private schools. This is the price we pay. San Francisco’s Chinatown is mostly restaurants and souvenir shops targeted at tourists. Where are this generation’s Chinese-Americans? Not living there anymore. Where are this generation’s LGBTQ youth? On campuses, in big cities, even buying farms in small towns. Raising kids, paying taxes, worrying about who is elected President. They aren’t flocking to Greenwich Village or the Castro anymore. They don’t need to.

Someday — soon — our Pride parades won’t be much different than our St. Patrick’s Day parades (except maybe with a bit less beer). They will celebrate the diversity of our population. They will reflect our achievements, our progress in history, and give us a chance to wave our flags to celebrate who we are. But they won’t be needed. They won’t be essential to our survival. They’ll be like fireworks on the Fourth of July — something we commemorate, but not vital to our identity or existence anymore.

I’m still a little saddened by the loss of these iconic places, these bastions of LGBT culture. They’re more museums now, remembering what was, rather than being vital hubs of our community. All change is painful, but we don’t stop progress just because we want to stay in the past. And we don’t hold so tightly onto our past that we overlook how far we’ve come. We aren’t going backwards. We can’t afford to all move to San Francisco or New York and buy condos in our ghettos. The world has changed, and we are part of it.

Jake and I flew back to Oklahoma City, to our homes, our jobs, our friends and families, our churches. San Francisco was beautiful, was energizing, was even historic and nostalgic. But it’s good to be back home.