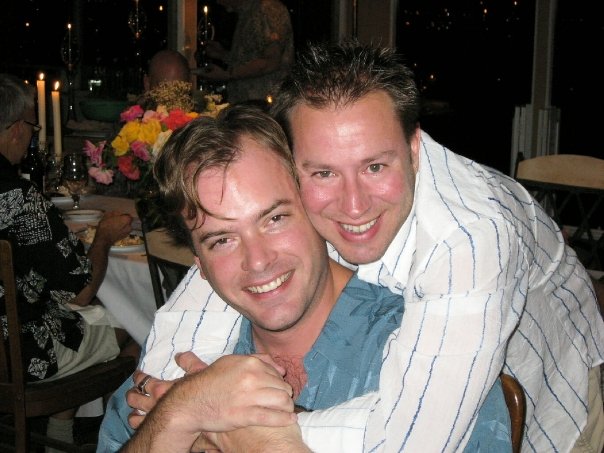 I recently came across a letter Chris penned to me during our first few months in the New Hope Program. I will forever treasure the yellowed piece of paper with his handwritten words.

Water takes on many different forms. It rains down on a dry and starving land. It cleanses the wounds of those beaten, scraped, and wounded.

In the form of water – I see you, an ever changing presence in life. Just as water is essential to mankind, you too are essential to God. L.T., I see in you a desire to sustain those in need. I see sympathy for the poor. I see a servant spirit that allows others to have a friend they can depend on . . . and enjoy life with.

I am not sure what my response was then but I imagine it probably went something like this . . .

Shortly after our time in the program, I received this missive from Chris.

There are some things I need to talk to you about. I feel that there are some things you need to deal with now or else God is going to deal with them in his own way. I know you are going through a lot of confusion right now and some serious questions are floating around in your head about where life is taking you. I think it’s important for you to know that God will not give up on you. He will continue to call you into his bosom. I am very concerned about you and I feel that I need to be completely honest with you. You are one of my best friends and I don’t want to see you go through the pain of the consequences of issues not dealt with.

You have issues with rebellion and bitterness that you have been struggling with for a long time. You have had plenty of opportunities over the last two years with Damon to allow him to be an instrument in your life to be used by God. But you have refused to work with him and other leaders in your life. In the beginning I wondered why Damon had such issues with you and I figured that he obviously did not know the real me. Now I think I understand why there has always been such animosity between the two of you. You continue to treat him with disdain every time you see him, and continue to shun the leaders that God has placed in your life. I still don’t think they see the real L.T. Miller. The real L.T. Miller doesn’t want to be like this. The real L.T. Miller will always be one of my best friends, but right now all I can see is someone who is extremely selfish.

The second area of concern is that it seems you have abandoned your willingness to follow God’s will for your life. Lately you have made mention of not even knowing whether or not you want to be a Christian anymore. This concerns me. I see an increasing desire in you to experiment in the gay lifestyle. Believe me, L.T., you have been spared from Pandora’s Box. Believe me, you don’t want to open that box. Because once you do you’ll never be able to close it no matter how hard you try.  Do not give into those feelings inside of you that you know are wrong. I’m afraid if you do you’ll provide a foothold for the enemy to come into your life and destroy you.

That letter was the catalyst for many late night discussions between Chris and me.  In time, as we continued to share our journeys with one another, we both began to dismiss the teachings of New Hope, each of us coming to the conclusion that the views of leadership were twisted and distorted.  And while I can’t speak for Chris, I personally have come to believe that my time in New Hope was akin to being in a cult. Sure, I could have left anytime I wanted, but I had been brainwashed into believing I couldn’t. Fear tactics were used to dispel any thoughts of venturing out into the real world lest I forever be doomed to an unfulfilling life that would bring nothing but despair and misery.

Chris once told me that coming out of the program with all the structure yanked out from underneath him felt like a “polar bear plunge.” We both took that plunge; and once we got over the initial shock of that daring jump into a brand-new world, we soon came to the realization that God had finally answered our prayers – but not in the way we could have ever imagined. In his infinite wisdom, he chose not to free us from our homosexual feelings and desires – he chose to free us from a misguided ideology that had caused us to hate ourselves. He delivered us from the ingrained belief that we were somehow defective and needed to be fixed, finally bringing us to a place where we could accept and love ourselves for who we were created to be.  After years and years of heartfelt prayer, we were finally able to bask in God’s love without fear or shame. That newfound sense of freedom was glorious.

After separating ourselves more and more from the Program and those still entrenched in its pervasive influence, we decided to get an apartment together. I’ll never forget that warm April day when we moved into what was to become our beloved flat in Point Richmond, a quaint little village just on the other side of the bay from San Rafael.  The bridge that now separated us from our past life spanned more than five miles across the bay into a world far removed from what we had known. Since we were confined to Marin County during the program the bridge had been strictly off limits unless chaperoned by a member of leadership.  Looking back now, I realize that the Richmond-San Rafael Bridge was symbolic of so many things. She was the emblem of hope and freedom. Finally after years of struggle we had crossed over to the other side, and had landed on the shores of a new life.

Our new home was the entire upstairs of an enormous house built in the early twenties. Chris loved it. I hated it. I would later learn that the place had a lot of potential but at the time all I noticed was peeling paint and missing shingles. When I walked in for the first time I immediately cringed at the weathered carpet, a swirl of avocados and browns. The walls were adorned with dingy wallpaper that was peeling in the corners. I knew even before venturing up the narrow stairway leading upstairs to a central hallway that I was stuck in a 1960’s time warp.  Over time, I grew to love that house on Eddy Street. Eventually the faded wall paper came down and the walls were painted lively colors; and the carpet was ripped up revealing beautiful wood floors underneath. In time I fell in love with the dormered ceilings, nooks and crannies, and built in book cases; and became mesmerized by doors that opened into hidden spaces. I was constantly entertained by our resident ghost; I called her Elizabeth.  Our new home soon became a magnet for lively parties and happy memories.

As I sipped my coffee one early Saturday morning, Chris groggily came into the kitchen to join me.  He immediately offered me one of the brownies he had made the night before. As he handed me the delectable treat he warned, “Be careful buddy, I made them a little strong”.

“Chrissie Poo, today is the day. I am ready.”

“Yep, I’m sure. I’m ready. Let’s do it!”
By the time we reached the BART station, I was beginning to feel the effects of the brownie, and lost myself into a world all my own. My dreams seemed to breathe as the train roared through sprawling suburbs, the sky above the golden hills a canvas of blowing blues and burnt oranges.

I’ll never forget my first encounter with the Haight-Ashbury. I immediately fell in love with her bohemian charm. Colorful restaurants and bars lined her crowded streets, along with booksellers, record stores, and head shops.  Solicitous old hippies sold weed on the street corners.  Those congregated there ran the entire spectrum of humanity, but by far, the most interesting characters were the gawking tourists with their eyes dangling out of their heads. I suppose Chris and I fell into that category. We found our way to the vibrant Cha Cha Cha Cha where we lingered over our pitchers of sangria and plates of jerk chicken, Cajun shrimp and plantains.

I looked over at Chris, “Dude, should we be drinking? I mean . . . I heard that alcohol can cause you to bleed more. You ever hear that? I’m a little freaked.”

Chris rolled his eyes, “Chill out, poodle; it’s going to be fun.”

Later that evening while watching TV we admired our tattoos. Chris had forever emblazoned on his chest an enormous Celtic cross. I opted for something a little more subdued. I had inked onto my ankle a small blue fish and cross.

Chris describes the experience perfectly. I would like to share an excerpt from one of his pieces on our blog.

That commitment remains, and every time I look at that tattoo I feel a sense of gratitude – a thanksgiving if you will. God WAS there for me, through ALL things. I was not cut off from Him for being gay; in fact, my relationship with God has become deeper than I could have even conceived of back then . . . and that love has seen me through. So I give thanks . . . to God and to every person who has played a part in bringing me to where I am now. I wouldn’t be the same without you.

All I gotta say is, “Back at ya buddy. My life wouldn’t be the same without you either, you silly goober. You have been a brother to me, and I am forever grateful for all the laughs and tears we’ve shared together.”