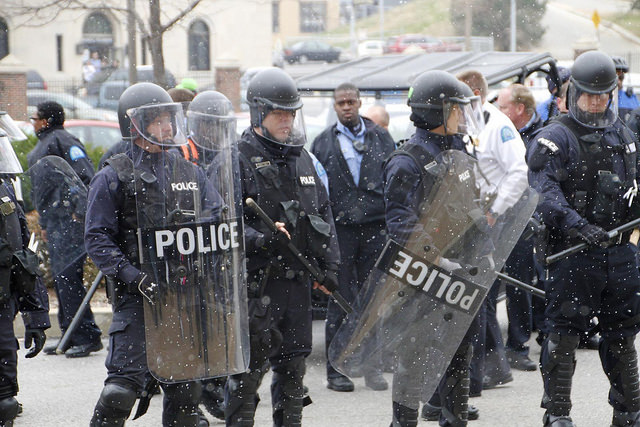 This Thanksgiving I was Grateful for Being White A few nights ago we went to bed while the news cameras captured images of smoke-filled streets, flaming cars, lurching figures, and flak jackets. I watched my twitter feed for another hour or so after that, perversely drawn to the mayhem unfolding. We awoke the next morning to updates about numbers of arrests made, cars burned, and buildings set ablaze. I looked at pictures of a beauty supply store that had been looted, and wondered about the kind of victory that results from stolen weave.

I watched, cursing the stupidity of riots and feeling superior.

I lead a typical segregated Caucasian life, so the vast majority of Facebook posts appearing on my page are from people roughly like me; white and therefore privileged. Posts on the topic were primarily in two forms: proclamations that looters are idiots and that justice had been served, or “enlightened” responses of sorrow and outrage over the grand jury ruling. This last group bothered me the most. It seemed like the more moneyed and nestled into the bosom of Whitlandia, the more vocal the objections. As if any of them have a clue.

As if I have a clue.

Since when do I deserve a place in the conversation?

I live on the outskirts of a small city where real poverty exists. Where real drug deals take place, many of which involve people with more melanin in their skin than mine. But I’m safely ensconced in our beat up little house, in a white ghetto of helpful retirees. On Sundays, I drive to a beautiful church in an affluent small town with no black families in the congregation. I do see African American faces once in a while. While shopping.

So what the hell do I know about a particular town in Missouri, or a particular young man and an accused police officer? What can I know from way up here in my sheltered white bread existence?

Until recently, I lived in Rochester, NY which has been in the running for most dangerous cities in the country. Its violence takes place almost entirely within the black population, and is usually drug related. My kids went to an inner city school with over 70% black students. I was once threatened with a knife by a black man. While living in a rough neighborhood one Halloween, a group of black teens pushed me down and grabbed the bowl of candy I’d greeted them with at the door. Decades later I helped pick a white high school kid up off the sidewalk and into an ambulance after he’d been jumped by a couple of black youth while walking home from school. I was called a “stupid white bitch” by a black girl while hurrying down the hall trying to reach my son at the end of a gun scare lockdown at school. Another day my son found a large kitchen knife in a snowbank outside the school’s main entrance.

I have no romantic notions about the urban black experience. But neither is it real to me because it can’t be. I don’t live it, and never will. I don’t have a realistic view, nor do I have a romanticized view.

As I read through the news and saw people’s snarky or well-meaning posts, I thought I was going to vomit. The over simplification of tremendous complexity blew my mind and turned my stomach. Eventually I did as a Victorian lady would and took to my bed, where the enormity of the problem brought me to tears.

We are dealing with a subset of society that has been poisoned by history, a history of our white ancestors who carefully groomed and formed a culture. Our white forefathers enforced the systematic destruction of families, sanctioned rape, demanded reliance, punished independence, used violence as punishment, and inflicted hundreds of other intense wrongs. It was intentional cultural formation in an intensely disordered way. 150 years and some six generations later, we have turmoil as a result. New generations adapt and morph and evolve within a caustic environment and struggle to breathe and thrive within it. Societal problems bubble and steam, young men shoot each other over drugs, and cops are scared. People are trapped in an environment where violence is normal and anger is ever present, living a life where you can’t walk down a street without being glanced at with nervousness and suspicion.

How must that feel? How badly would it make me want to explode and lash out and figure that if I’m going to be viewed as an animal or a criminal, I might as well act like one? How Herculean an effort would it take to resist the lull of normality and fight to be seen differently?

Should we really be surprised that some people in those circumstances give up, or explode, or mimic the thuggishness of their mentors?

Violence in these communities is real, and cops are often rightly scared. And sometimes they are wrongly scared. Sometimes when a community believes they are disenfranchised from the judicial process, all that frustration builds up and explodes into a massive force of broken windows, smoking cars, and stolen fucking weave.

Thanksgiving has passed. I imagine a bunch of individuals fighting off feelings of remorse about what was done in the heat of that release of passion. People crying their own very complicated tears.

From where I sit, on my Whitelandia tuffet, I can see no end in sight. No easy fix through program or budget line item or Facebook insight.

As we lay in bed that day, sickened, Diane held me as I wept. She said “I wonder if God cries? I’ll bet He does. I’ll bet He cried the oceans into being before we got here.”

There is no sweeping fix, but that doesn’t mean I’m helpless.

Trinity Church in Haverhill, MA is part of a three-church effort to reach at risk populations of socioeconomically endangered kids, many of whom are people of color. Through after school programs, these children are pulled off the streets and out of unsupervised houses and exposed to things they would not otherwise have a chance to participate in. Music. Theater. Montessori programming. I’m going to get involved, even it it’s only to hand out snacks and chat with the kids for a few minutes one day a week. I don’t expect it to do much in the big scale of things. But I hope that I can build relationships with young people I’d never otherwise have a chance to know. To exchange and understand the realities of our existences so that I’m not quite so out of touch. Who knows, maybe I can help a child explore their gifts and use them to proceed more quickly out of the darkness of their historical past and into the freedom that God desires for them.

I don’t know. But it’s something.

And I’ve got to do something.

Because this holiday season, I recognize the privilege of being born white. And God help me, I’m grateful for it.