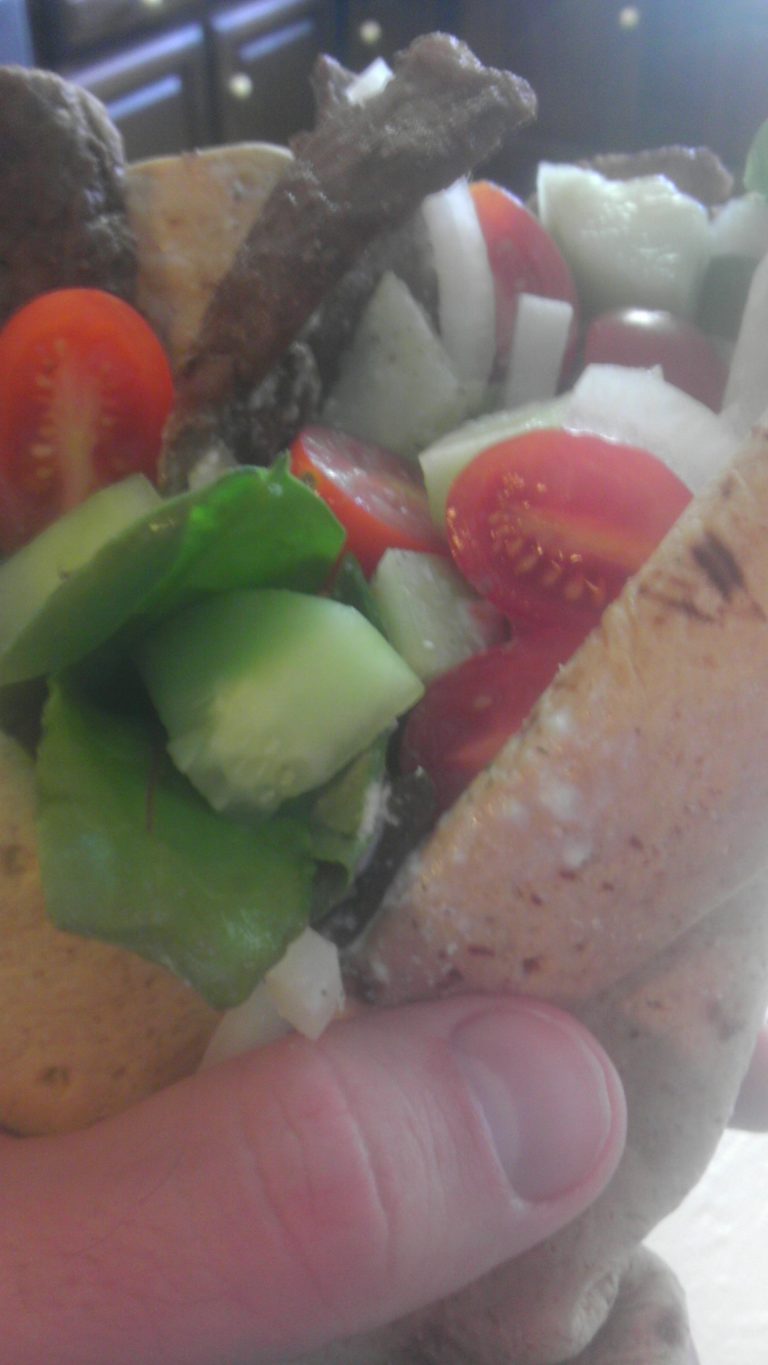 So, there I am, in my usual position, standing in front of the fridge, staring into it, trying to figure out what to have for dinner. One can only eat pasta so many nights in a row before total pasta-boredom sets in. And I’m a pasta fiend.

“What do I want? What do I want?” Nothing in the cold light of the refrigerator pops out at me. Got some odds and ends in there I could throw together, and then I spot the flat bread. Yeah, I could do that. And suddenly, it all comes together.

And that’s the whole point behind bachelor food: quick and easy, with stuff I mostly have on hand already. Hey, planning is great. Wish I actually did that more often.  But most nights, it’s the blank stare and the final throw together.

This one is easy. Gyros / fajitas. Yeah, whatever – same concept, slightly different flavors. But the basic idea is some kind of thinly sliced meat (beef or lamb – even chicken tenders will work), stir-fried with some seasoning, some salad type vegetables (onions, tomatoes, cucumbers, and maybe some greens), rolled into a flat bread (or pita, or even a tortilla) with some dairy sauce (sour cream or yogurt).

From my perspective, the main difference between fajitas and gyros is that with fajitas, the vegetables (onions and peppers) are fried up with the meat and served in the tortilla warm, topped with sour cream or guacamole; whereas with a gyro, the veggies (onions, tomato, cucumber) are piled on the pita cold like a salad and topped with yogurt. And yeah, the meat and seasonings are different, but they’re basically just different spins on the same concept. So just go with whatever you’re in the mood for at the moment.

I like to keep what I call “quick meats” in the freezer for rapid deployment. That’s chicken breast tenderloins and beef stir-fry — they thaw quickly in the microwave and cook up almost as fast in the skillet. I considered slicing up a lamb steak I had in the freezer for a more authentic taste, but that seemed like too much work. So I pull out the beef, and throw it in the microwave for a minute or two just to thaw. (Hey, this is run and gun, people.)  For real gyros, I’d need some kind of special Greek seasonings, like cumin seeds, fennel seeds, coriander, cardamom, ground clove, etc, but I generally don’t keep those on hand. Fajita seasoning is easier cuz they sell it in shakers at the supermarket. But in a pinch, I just use ye olde “Season All” seasoned salt. I use it on grilled steaks, grilled vegetables, heck, I’ve even sprinkle it on salad.

But I was in the mood for the flavor of tzatziki – that great cucumber-dill-yogurt sauce Greek food is famous for.  Any recipe worthy of the Food Network would require fresh dill – who keeps that? – but I do have dill weed in my spice rack, and that’ll work just fine.

So here we go.

For the tzatziki, you’ll need

Do the tzatziki first. This will give all the flavors a little time to blend and “get happy” (as Emeril likes to say). The beef will cook up fast so we’ll do that last. One tzatziki recipe I found online a while back recommended just throwing all the ingredients into a blender. Sounded great – but what came out was a runny mess. Turns out there’s a lot of liquid in cucumber. Who knew? I learned the hard way, so let’s just do this by hand.

So to start, peel the cucumber, and then cut it lengthwise into wedge quarters so you can remove the seeds. Then cut into ¼ inch slices. Set aside about half for the gyro “salad”, and the rest, chop up finer (dice) for the yogurt sauce.

Chop up the garlic, or use a garlic press

if you’ve got one. (Hey, if you’re a garlic fan, pick one of these up on Amazon or at the supermarket. They’re only a couple of bucks, and they’ll make dealing with garlic a whole lot easier.)  Combine the yogurt, chopped cucumber, garlic, olive oil, lemon juice, dill weed or mint, and a dash of salt and pepper in a bowl. And that’s all there is to the tzatziki. Stick it in the refrigerator while you do the rest.

Now chop up the onion and tomatoes into bite-sized pieces.  I used cherry-tomatoes because that’s what I had on hand (they seem to last longer in the fridge than full sized tomatoes). A more traditional gyro might be served with shredded romaine lettuce, but I just used some mixed organic salad greens.

Do a quick stir fry

of the meat in a little bit of vegetable oil, and season with … whatever you’ve decided to use: fajita seasoning, Season All, or your own concoction from the spice rack.  Depending on the thickness of the cut, the beef should cook up in about 5 minutes. Don’t overcook it or it’ll turn to rubber.

Then grab your pita or tortilla, and start loading up.  The whole thing took about 20 minutes from the time I started pulling stuff out of the fridge until I started stuffing my flatbread to eat.

Life should be this easy – and this good!