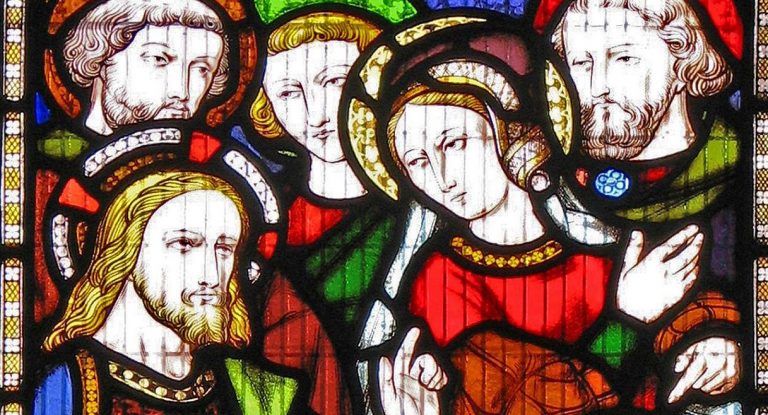 Christianity should be synonymous with feminism. As the religious belief with Christ in its name, we should be the ones leading the bout for gender equality. Unfortunately, one of the groups of people that perpetuate a sexist mentality in society is our Christian Churches. Patriarchy, male-headship, and gender bias is rampant in Christian culture; all of which box women into only two acceptable roles: mother and wife.

We live in a privilege ridden society in which women are still unequal to men. With wage gaps, rape culture, and sexism — it is clear there is a ways to go for gender equality. Women are clearly a marginalized group, yes even within our churches. What we do to the least of these we do unto Jesus. When we silence women, we silence Jesus.

Feminism is making mainstream news, but our churches still haven’t done much, if anything at all, for gender equality. Christianity desperately needs feminism, and here is why:

1. Young People Are Not Taught To Look Up To Women.

There are still far too many denominations that do not allow women to be ordained ministers of their congregations. Women can have roles in the church but they are usually secondary to a man. A lot of these roles are usually in the nursery, children stories, overall stereotypical female gender roles that are primarily service and hospitality oriented. The heads of most churches, locally and administratively, are men. Without women leaders in visible places of our church, we hinder young people by not teaching them to look up to women. We then have young women who only strive to be successful in restricted gender roles. Not because that’s their desire but because that’s what they have been taught to do.

2. Both Man and Woman Are The Image of God.

Gender Complementarity is a common theological argument against same-sex relationships held by many conservative Christian denominations. This traditionalist view of scripture is that marriage is to be reflective of the image of God and needs a man and a woman to reflect that. This doesn’t allow single people or people who just choose never to get married much hope. But scripture does say man and woman were created in his image (just perhaps not necessary for marriage see here) which means that women, are equally important to reflect that image. My friend Emily Ferguson questioned how gender complementarity translates to women.

Gender isn’t binary. A penis doesn’t make a man and a vagina doesn’t make a woman. This lack of understanding on gender leaves little room for understanding of our transgender brothers and sisters. When we paint gender black and white, we tell transgender individuals they aren’t apart of the body of the Church. Gender itself is a societal construct and is limited by our own personal constraints. To limit the beauty of fluid gender is to limit God’s perfect design.

4. Christian Language Was Created Within the Framework of Patriarchy

We have associated masculine traits with positive ones, and feminine traits with negative ones. For example, we tell young adults to “man up” as seen as a motto on the back of the men’s dorm at my private Christian University for years. Then we tell them not to be a “sissy”, a feminine trait. As if expressing any sort femininity is a bad thing.

Also, God is commonly referred to with Him/He pronouns. But if man and women are both created in God’s image, isn’t God also feminine? Recently, popular evangelical blogger Rachel Held Evans was accused of heresy for referring to God is “She”. She responded beautifully to that accusation.

5. Women Are an Integral Part of the Gospel

Many churches teach that women should be submissive and silent. But as a proud born and raised Christian, that’s not what I read in the Bible. Women are constantly shown to be strong, vocal, and important parts of scripture. From Queen Esther defying her husband saving her entire race, to Ruth being called a “woman of noble character”. But specifically in the Gospel, it was Mary Magdalene, Joanna, and Mary the Mother of James whom the angels told Jesus had risen. The men of that time believed their story to be “nonsense”. But it shouldn’t be mistaken as coincidence that the angels, and then Jesus, appeared to women first. This is a pointer to the amount of faith these women have at that time, arguably more than Jesus’ apostles.

6. Jesus Was Against Slut-Shaming

Mary Magdalene was caught in the act of adultery and brought to Jesus by the scribes and Pharisees. Mary herself wasn’t married, which really shows where we place the blame in extramarital affairs and why the term “the other woman” is prevalent, but was caught with a married man. Instead of stoning Mary, which was the cultural religious laws of that time, Jesus asks for those without sin to cast the first stone. It wasn’t until everyone had left that Jesus has a private conversation with Mary and asked “Where are your accusers?”

“Your dress is too short”
“Your top is too low”
“You should be wearing tights” (I mean seriously, who wears tights anymore?).

The reason behind the policing is twofold. We want to keep females modest and we also don’t want to tempt the men with lustful thoughts. Instead of it being a man’s job to see women as people deserving of respect, we place the responsibility of a man’s lustful thoughts on women. This type of policing is seen in rape culture where instead of teaching boys to not rape, we teach girls how not to get raped. It places the blame on the victim. An example is how a student was asked to leave a prom because male chaperons complained of possible “impure thoughts”.

There should be a certain amount of modesty in places of worship. If you’re wearing the same dress to go to the club that you go to church, you’re probably going to get a few stares. But that should be left up to the individual and not policed by me or any other person. Our churches should be welcoming of people even if they’re strippers and walk in with clear heels.

8. Virginity is a Woman’s “Gift” to Her Husband

“Your virginity is your most important gift brought to marriage.”
“It’s better to get married quickly than risk falling into the temptation of premarital sex.”
“If you’re not both virgins when you’re married, your marriage will suffer for years.”

These are all things told to young Christians in our church but especially emphasized to females. These types of messages tie a woman’s worth to her virginity. There are even horror stories of families paying to repair their daughters hymen (a membrane that surrounds or partially covers the external vaginal opening) which can be broken outside of vaginal sex doing activities like active sports, to repair the daughters “virtue”. Women can be seen as “damaged goods” and tying a woman’s virginity to her self worth is dangerous. Oh, and purity balls are creepy.

9. Women are Asked to Stay with Their Abusers

Although not always explicitly, women have been encouraged to forgive and stay with their unfaithful or abusive husbands. This especially true in certain cultures. Women have been encouraged to stay with their partners because divorce is a sin in the eyes of many Churches. Being a divorcee in the church is especially bad for women. Not being a virgin will be difficult for a lot of Christian men to accept.

Let’s face it, the Church has trouble talking about sex let alone sexual abuse. When a spiritual leader is accused of sexual abuse, especially of a child, our initial thoughts are to dismiss the outlandish claims. Time after time there have been cases that show sexual abuse was reported and nothing was done about it. Most recently, in the neo-reformed theological world, the founder of Sovereign Grace Ministries is accused of sexual abuse of children spanning over a decade. The worst part is there are claims that Church pastors and elders did nothing of the accusations.

Every sexual abuse allegation deserves an investigation. Feminism has been a longtime movement of the protection of sexual abuse victims of all genders. As seen in the past, the Church could learn a thing or two on protecting victims.

11. Jesus was a Feminist

Yup, you read that right. Jesus was a hardcore feminist. Time after time he stood up to the men of the time in defense of women. His relationship with Mary Magdalene reflects how Christ wants us to treat women, specifically those shunned and outcasted. When she was slut-shamed He told her accusers to leave. Or when she washed His feet with her hair, an act of complete service, the disciples were upset He would let a sinner touch Him. Turning toward the woman, He responded to Simon,

“Do you see this woman? I entered your house; you gave Me no water for My feet, but she has wet My feet with her tears and wiped them with her hair. You gave Me no kiss; but she, since the time I came in, has not ceased to kiss My feet. You did not anoint My head with oil, but she anointed My feet with perfume. For this reason I say to you, her sins, which are many, have been forgiven, for she loved much; but he who is forgiven little, loves little.”

Jesus was a feminist and it’s time the Christian church was too.
—-
feature photo credit: Jesus and the Women, Lawrence OP via photopin cc
[box type=”bio”]

New York-based author ELIEL CRUZ is the president and co-founder of the Intercollegiate Adventist Gay-Straight Alliance Coalition, which represents six unofficial LGBT-straight alliance groups on Seventh-day Adventists educational institutions in the U.S. The IAGC seeks to promote understanding, compassion, education, awareness, and community for those who wish to integrate their faith with their sexual and gender identities.

Eliel is currently seeking a dual degree in International Business and French studies at Seventh-day Adventist flagship educational intuition, Andrews University. He frequently blogs on the topics of sexuality and religion, as seen at The Huffington Post, The Advocate, Believe Out Loud, Campus Pride Blog, Spectrum, Patheos, and various other publications.