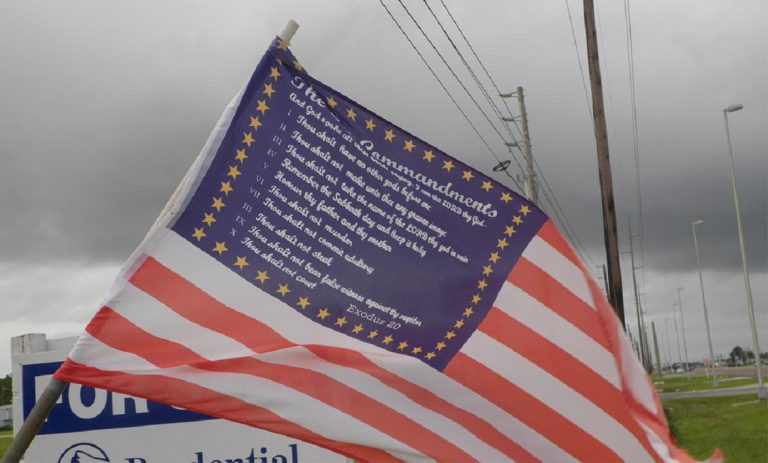 Legalizing Discrimination in the name of Christianity For years, anti-gay politicians and religious impersonators have been warning their followers that “the gays” want to put preachers in jail, and that LGBT equality will allow the gays to fully and legally intimidate, bully, and discriminate against good Christians. A new flurry of bills throughout the country has tipped their cards to the rest of us — and the reality of their goals is nothing short of horrifying. While these professional bigots do all they can to convince us that the gays are the danger, they’re working hard to put the gays in jail, and give legal blessing to anti- gay discrimination.

There’s no way to add hyperbole to a bare naked truth that is as ugly as it is stripped bare. These people literally not only want people like you and me in jail, but to have the legal right to refuse service — even basic medical care — just because we are gay. The implications are as staggering as they are bone chilling.

First, let’s look to see what they’re saying about us. It doesn’t take long to find article after article warning us that the gays are trying to “silence” Christians or to “put pastors in jail.” Now the claim is that we want to put “business owners in jail” for refusing to sell us a wedding cake.

Never mind the fact that none of this is true, and there has not been a single pastor put in jail in the US for preaching against homosexuality, ever. Nor has there ever been a threat of jail for refusing to bake a cake for a same-sex wedding. And there never will be. Because, unlike our bigoted, bloviating counterparts, we actually understand the First Amendment to the US Constitution.

We also understand what it’s like to be persecuted.

In fact, if these groups (FRC, AFTAH, NOM, and others) had their way, the sodomy laws would all be back in place, and we’d have “homosexual propagation” laws to keep us from telling teens that it’s perfectly okay to be gay, so don’t kill yourself. You know, just like the one in Russia. Of course, the bigots describe the law as a way “to keep homosexuals from recruiting.” Stay classy, boys.

This collective facepalm-worthy nonsense from professional bigots could easily be laughed away if it were not for the fact that they have very powerful allies in state legislatures across the country. These lawmakers are the reason why it took 11 years to pass the Mathew Shepard Hate Crimes Act, why the failed (and finally repealed) Don’t Ask, Don’t Tell military policy was passed, and why it took 17 years to repeal it. They are the reason why we still don’t have workplace fairness for LGBT people with an Equal Employment Nondiscrimination Act.

They are the boy with the fingers in the dike, doing all they can to keep LGBT equality from ever seeing the light of day. They are the gatekeepers, and they do their job well.

When the Supreme Court handed down its Lawrence v. Texas decision that struck down all of the last remaining sodomy laws in this country, work began to find other ways to demean the gays and keep us in our rightful place — under the thumb of religious-impersonating bigotry.

First came the effort to keep us from our ultimate goal: Full marriage equality. They did their job well. Laws banning same-sex marriages were passed in droves, then someone realized that the Constitution has that pesky “equal rights under the law” claus in its 14th amendment. So they began passing anti-gay amendments to state constitutions.

The tide is turning, though. Same-sex weddings are now allowed in 17 states, and we are right to celebrate. But we have been very, very negligent in protecting our basic human rights — even in the great U.S. of A.

In 29 states, it’s still perfectly legal to fire someone just because they’re gay. Including here in Tennessee. But that’s not good enough for the bigots. They’re working to pass laws that will make discrimination perfectly legal.

Tennessee legislators were among the first to attempt to give “Christians” and “Christian” bullies the right to discriminate. Two years ago, we saw the resurgence of a bill that would specifically protect someone from punishment if they “expressed their views on homosexuality.”

Tennessee has a long history of really, really bad bills. State Senator Stacey Campfield attempted to pass a bill that would prevent teachers from even talking about gay people — the infamous “don’t say gay” bill — for more than six years. Thankfully, he failed. Every time.

But these bills have only scratched the surface. You see, pretending that gays don’t exist, and giving people a license to bully is not enough. Not even attempting to police the pottiesare good enough. Yes, one Tennessee legislator filed a bill to keep transgender people from using a public bathroom — despite the fact that it’s part of a requirement for transition.

Now, the latest attempt is to dig up the failed “sincere religious belief” phrase as a reason to deny services to anyone wanting to get gay-married in Tennessee. This year, State Senator Brian Kelsey (R-Germantown) filed a bill to do exactly that. Dubbed the “Turn the Gays Away” bill by my good friends at the Tennessee Equality Project, it would give business owners the right to deny their public business services to anyone that would “further a civil union, domestic partnership, or marriage not recognized by the Tennessee Constitution.”

That’s right, if this steaming piece of legislative excrement is passed, any florist could deny selling flowers to a gay couple who got married in another state. Or a baker could deny baking a cake for a reception in Tennessee held for a legal wedding held in Massachusetts (sadly, such split-wedding-reception events are common for us in the Volunteer state).

A similar bill is making its way through the Kansas state legislature. It’s already passed the house. Apparently “sincere religious beliefs” is now an excuse to discriminate. Surely, someone wouldn’t try to pass a law that allows for licensed professionals to deny services to someone for those same reasons. Oops. Too late.

Slip over to Idaho. A GOP representative named Lynn Luker filed what he called a “pre-emptive” move to allow ANY licensed professional to refuse service to those that violate their “religious beliefs:”

“On Tuesday, Rep. Lynn Luker outlined a plan to shield religious people from the threat of having their professional licenses – issued for everything from midwives and doctors to physical therapists and nurses – revoked.

A similar story at RawStory.com points out that the Idaho Bureau of Occupational Licenses oversees 28 boards that issue licenses, including accountants, attorneys, barbers, hairstylists, insurance agents, nurses, physicians, psychologists, and real estate agents. If this bill gets passed, ANY of these licensed professionals deny service to anyone (LGBT people are not specifically listed) and not risk losing their license.

Only because they have a “religious belief” that says they don’t have to. Or something. I guess we don’t need to remind people that “sincere religious beliefs” were used to justify slavery and segregation laws. Do we?

The problem with this kind of legislation starts with the blatantly obvious. The First Amendment clearly states that any law that “respects the establishment of religion” is unconstitutional — so passing a bill that gives people “religious” excuse to discriminate flies in the face of not only the 14th amendment (that whole “equal rights under the law” thing again), but also the first!

By sanctioning this kind of baldfaced religious-based discrimination, these legislators are violating not only the reality of common sense, but with them, they spit on the parchment of the very Constitution they have sword to uphold.

But the legal ramifications are just one part of this travesty. The religious implications are stunning. After all, what kind of religion tells its followers to deny basic service to someone because they’re gay?

If we are to assume that these laws are rooted in someone’s belief in Christianity, what kind of ugly monster would confuse this kind of discrimination with the very same Christ who gave grace to prostitutes, Samaritans, Roman Centurions, and even tax collectors?

“We don’t serve your kind here.”

DAVID W. SHELTON is a graphic designer, blogger, writer, activist, and author of The Rainbow Kingdom: Christianity & The Homosexual Reconciled

. He lives in Clarksville, TN with his better half and their many, many pets.