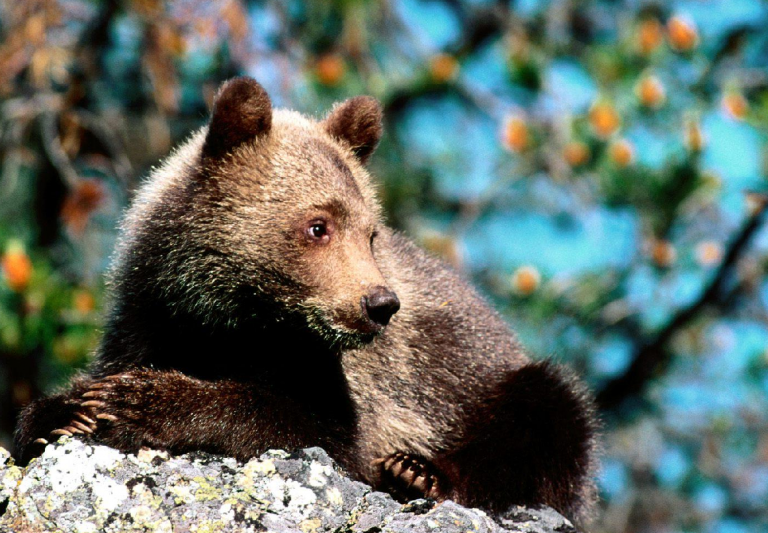 Grizzlies Made Me Gay It happened on a chilly August morning in a high-mountain meadow about seven weeks into a ten-week, 1,000-mile solo backpack trip through the most remote, rugged, wild country left in the continental United States.

I had left from my front porch in Missoula, Montana, and was on my way to Waterton, Alberta, mostly off trail, crossing only three roads along the way.

I lay safely hidden behind a downed, subalpine fir tree watching a silver-tipped sow grizzly and her two cubs about 100 yards or so upwind of me. She was lying down, resting, keeping watch of her young ones as they wrestled, rolled and chased each other in the grass. The cubs ran and pounced on their mom a few times and she nudged them away with her snout. When one cub tried to suckle her she swiftly swatted the youngster with her powerful big paw, in a seemingly effortless motion, and sent the startled cub rolling. Then she got up, walked over, and reassuringly licked the cub until all seemed well in the world.

I departed on this big, wild adventure deeply depressed, and wasn’t so sure I planned to return. A few drunken nights prior I drove to a trailhead with my Remington Model 870 12-gauge shotgun planning to walk a ways into the woods and pull the trigger with barrel in mouth. Instead, I sat in my car thinking of my son, my family and my friends, sobbing so hard I was shook until I passed out. I awoke at sunrise and drove back home.

I still struggled with father’s death the fall before, and my wife of 14-years demanded divorce; I had grown too damn miserable to live with. Years of accumulated shame, guilt, fear, confusion and sorrow was rumbling throughout me like thunderous dark clouds ready to let loose a dangerously potent storm. As a leader in Montana’s wildlife conservation realm I was commonly praised for my straightforward honesty while secretly hiding a dishonest life. I was living a lie, suffocating beneath a deep internal avalanche, and I hated myself. Turmoil ate away at me like cancer.

So naturally, as I have often done in my life, I escaped to the wilds.

When I first I retreated to the wilds of Montana fresh out of a Marine Force Recon unit, I developed a particular fondness for and connection to grizzly bears. They’re beautiful, powerful, fascinating, potentially dangerous animals that are gravely maligned and misunderstood. Some people hate them and many fear them because they don’t know and understand them. They’re bears. They are what they are; they do what they do. They want (and should be given) respect, space, and to be left alone to live and be themselves. I’ve dedicated most of my life fighting to protect wildlife and wild places always with this thought in mind: If we save enough room for grizzlies, which need a lot of space, we pretty much keep entire watersheds and ecosystems intact that sustain an abundance and diversity of species – including us.  As Doug Seus, founder of Vital Ground (a national nonprofit focused on protecting critical grizzly habitat) succinctly puts it: “Where the grizzly walks, the earth is healthy and whole.”

Such thoughts and more buzzed through my brain as I watched that sow and her cubs in that high-mountain meadow on that chilly August morning.

In nature, in the wilds, there are no societal-created norms, judgments and expectations. Everything is what it is. A grizzly might judge me as a threat or feast, but it doesn’t care who I fall in love with or sleep with. I was fighting to defend and protect wildness, naturalness and the freedom of wild grizzlies while denying and suppressing my own wildness, naturalness and freedom. Like the grizzlies, I am what I am and do what I do. I want  (and should be given) respect, space, and to be left alone to be myself.

I accepted myself that day while watching those magnificent and tenacious animals. In no small way, those bears helped save my life.  (I often joke with friends that grizzlies made me gay.)

Henry David Thoreau wrote, “In wildness is the preservation of the world.”  Wildlife and wild places preserve the truth and reality of life, death, and our primeval connection to this Earth. To deny that is to deny ourselves; to destroy it is self-destruction. To embrace, understand and accept it is to embrace, understand and accept our own innate nature and wildness.

Everything is what it is; including us. We are part of it all. We ignore that at our own peril. I learned that from wild grizzlies, in a wild high-mountain meadow, in a truly wild place.

DAVID STALLING is a writer, advocate, conservationist, and hunter, living in Missoula, Montana.

You can follow his writing on his blogs, My Gay Agenda, OUT into the Wilds, and From the Wild Side.
[/box]