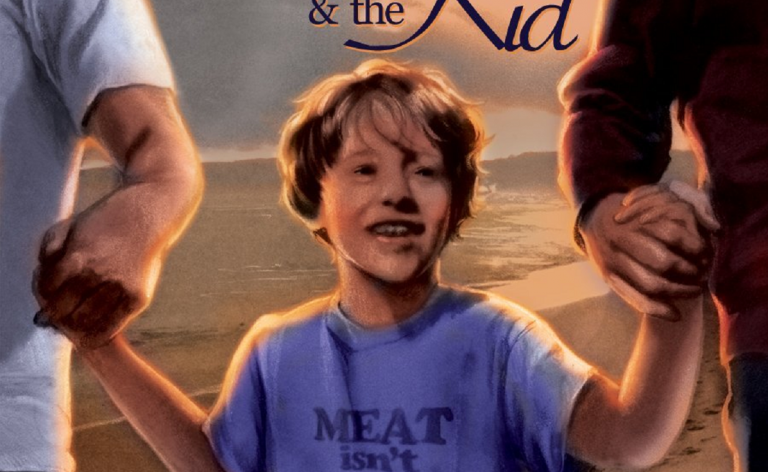 Some books inspire a real feeling of emotion that can elude expression with words.  Have you ever found forgotten cash in a jacket pocket at the end of the month while you’re living off ramen noodles and re-rolling cigarettes from the ashtray?  That’s an awesome feeling, right?  The kind that makes you smile so wide you feel your face might crack in half?  Or how about hearing your favourite song for the first time?  I remember I melted like butter the first time I heard Anna Nalik warble the impossibly long poetry that was her hit single “Breathe (2am)” whilst watching Kyle Chandler explode into Pink Mist in that fateful episode of Grey’s Anatomy that reduced me to a weeping mess.  Some stuff just affects you.  Well my friends, this book did exactly that to me; it hit me in my centre and permanently altered me.

You’ll realize before long that I never do anything in order, and this is a shining example of that.  Author TJ Klune’s exquisite masterpiece Bear, Otter, and the Kid

was released in 2011 for heaven’s sake, and I really nearly let it slide.  Lucky for me, and anyone who listens to the ramblings of this madman, I picked it up before it was too late.  Try not to be misled by the title that for all intents and purposes does sound like an urban retelling of Goldilocks from the producers of fluff movie “BearCity

,” because what Klune actually achieved with this novel defied all expectations.  If you expected anything less than genius, then you were wrong.  So, so, very wrong.

Without spoiling the surprise, the story told of Derrick, known to his friends and family as ‘Bear’, and how he fought to live his life when his mother left one day to run away with her boyfriend.  Being only seventeen, it’s more than plausible that Bear could have survived this affront, but not when his mother signed Power of Attorney of his six year old brother, Tyson (The Kid), over to him as well.  This book is a bittersweet tale of growing up hard and fast in the face of a rejection so thoroughly hurtful that most wouldn’t bounce back from.  Luckily for Bear, he has the best of friends, and indeed, he finally realizes his love for his best friend’s brother, Oliver (Otter).

The characters themselves were bordering on divine, and had me awed to the floor with the brilliance of their attributes, all coming to life and dancing round in my brain box so vividly.  The Kid was a treasure, a nine year old marvel that outsmarted and outdid most of the adult characters in the book with his in-depth understandings of the human psyche that only a child could bare.  He was sublime in his actions, hilarious in his dialogue and downright perfectly crafted as a foil to his older brother.  Bear on the other hand was flawed, he was natural and introverted, struggling desperately, not only to bring up his younger brother when he himself felt just like a child, but also battling with his own sexuality, something that seemed only ambiguous when it came to the wonderfully soulful and kind character of Otter.  This trio of men had me all but break out in song at the sheer brilliance of their interweaving stories, Klune’s family unit crafted into something outstanding that I could barely shake myself from.  Of course I had to shake myself from it.  Not only does Mr Klune write the story perfectly, he writes it with a gale force wind of emotion that will have you laugh out loud and cry into your pillow respectively, so I needed a break to get through the whole thing, rehydrating and refuelling for the second leg of the book like a marathon runner.

TJ Klune has earned his place as one of my new favourite authors, with a skill that borders on genius and a wit that transcends the genre.  His deliverance is perfectly timed and his author’s voice puts me in mind of Jay Bell, whose brilliance I frequently rant about.  But let me tell you this.  This author is incredible, an awe-striking voice of earth-shattering proportions that leads a generation of authors and will inspire authors yet to come.  The story of Bear, Otter, and the Kid

is one for everyone’s bookshelf and I myself display this one with pride.

And it doesn’t stop there.  Klune has also written and released the follow up novel Who We Are

, which checks in with the boys after their cute ending in the first book, and the author is currently working on a third instalment.  See?  There are some upsides to showing up a little late.  Now I have plenty to read and by the time I’m done, Klune will have neared completion on a story I no doubt will be frothing at the mouth for.

If you’re interested in reading a perfectly written masterpiece, then you can pick up this book and it’s follow-up from Dreamspinner Press, and all major online distributers.  You can also follow Mr Klune at the usual online hotspots by typing him into Google and seeing what he’s up to.  This author is destined for great things, a voice that can change the tide, and I am very proud to have found this little slice of literature that has had a profound effect on me.  Come along for the ride too, and I guarantee you will have the time of your life.

Now…if you’ll excuse me, I’m off to make some noodles and listen to Anna Nalik while I impatiently await the next instalment of Bear, Otter, and the Kid

* Reader’s Caveat: While this book is well written and tasteful, it does include some mild sexual referencing that may not be suitable for younger readers or for enthusiasts who do not wish to read scenes of a sexual nature.  These scenes however are very infrequent and not designed to titillate, but to further the story.*

Available at Dreamspinner Press, and on Amazon in paperback

BJ SHEPPARD is a 28 year old gay man, living on the South Coast of England. He’s currently doing a degree in Human Bioscience, but his passion in life is literature, both reading and writing. His love for M/M romance and LGBT fiction has been an ongoing thing through his life, particularly after coming out, and he believes that literature is a great way to spread a message of hope to anyone struggling to come to terms with their sexuality.

The books he writes and reviews are not just about entertainment, they are about hope, and through them he hopes we can send a message of equality to all corners of the world.

Follow his reviews, interviews and original writing on Insight Out!