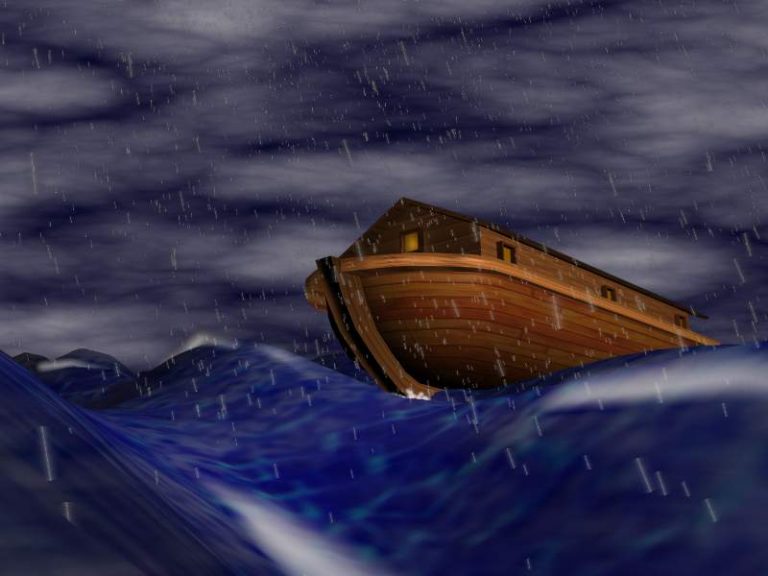 Noah, the Ark, and the Great Flood Humanity has seen some dark times.  And we, as individuals, will experience corruption, chaos, and violence in our lives. It seems an inescapeable part of the human condition.  We may wonder where God is in all the mess, or why he lets things get as bad as they are.  Somewhere in the crap going on around us, God is moving, and may yet have one decent person in the background ready to turn the situation around — make it ultimately work out for the good.

Humanity had become very corrupt, and the world was full of violence.  God was grieved that he had ever made people, so he decided to wipe mankind off the face of the earth and start over.  But Noah was a righteous man, the only blameless person living at the time, and he walked in close fellowship with God.  So God decided to spare him and preserve humanity through Noah’s family.

He told Noah to build a huge ark, and gave him specific instructions with the exact dimensions.  God warned Noah that he was about to send a flood to destroy everything alive on the earth.  God told Noah to bring into the ark two of every kind of animal, a male and female, and seven pair of each type of animal approved for eating and for sacrifice. And he was to stock the ark with plenty of food.  So Noah did everything exactly the way God had commanded him.

Finally, when Noah had finished building the ark and everything was ready, God told Noah to take his family into the boat.  Noah, his wife, and his three sons and their wives all got into the boat along with all the animals, and God shut the door behind them.  The rains began to fall, and the underground water erupted to cover the earth.  It rained for 40 days and 40 nights.  The floods rose, and the ark floated on the surface of the water.  Every living creature on the land was wiped out; the only people to survive were Noah and those with him.  Water covered the earth for 150 days, until the ark settled in the mountains of Ararat.  God sent a wind to blow across the earth and the waters began to recede.

Nine months after it had begun to rain, Noah sent out a raven to see how far the flood had subsided, and it flew here and there until the water was dried up.  Then he sent out a dove, but the dove found no place to land and returned to the ark.  Noah waited another week and then sent the dove out again.  This time, the dove came back with a fresh olive leaf in its beak, and Noah knew the flood waters were almost gone. After another week Noah released the dove again, but this time it did not return.

Twelve and half months after the rains had begun, God told Noah to leave the ark, and to release all the animals so that they could be fruitful and multiply throughout the earth.  Then Noah built an altar to the Lord, and sacrificed some of the animals approved for that purpose as burnt offerings.  And God promised himself that he would never curse the ground and destroy all living things again because of humans, even though everything they think or imagine is bent toward evil from childhood. As long as the earth endures, there will be planting and harvest, cold and heat, summer and winter, day and night.

And God blessed Noah and his family, and told them to be fruitful and multiply and fill the earth. And he said, “I have placed all the animals of the earth in your power. They will look on you with fear. I have given them to you for food, just as I gave you grain and vegetables. But you must never eat any meat that still has the lifeblood still in it.  And I will require the blood of anyone who takes another person’s life, for humans are made in my image.”

Then God placed a rainbow in the clouds as a sign of his promise to Noah, his descendants and to all the animals of the earth.