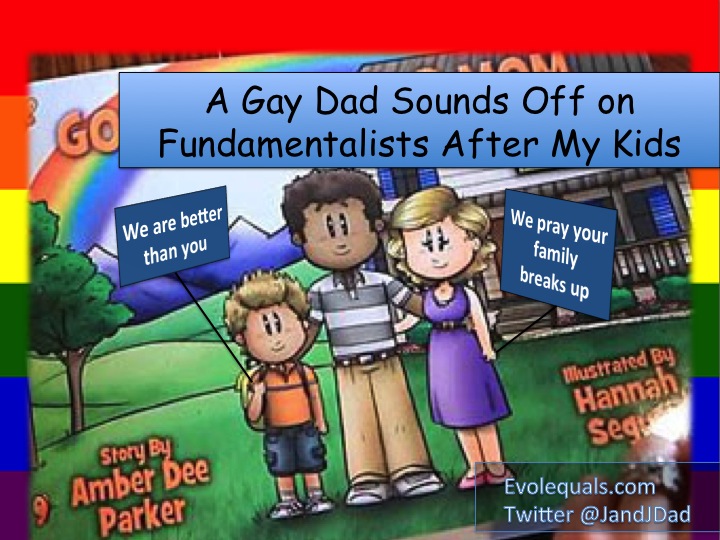 A Gay Dad Sounds Off About Fundamentalists Who Target Kids As a parent, my Job #1 is the protection and care of my children. It is my job to be vigilant over their self-worth, to keep them physically safe, to show them how to be moral and productive citizens, and to empower their spiritual growth. It is a duty that I take very seriously.

It is distressing when total strangers launch an attack against all those things specifically targeting my kids. That is exactly what author Amber Lee Parker and illustrator Hannah Segura have done with the release of their children’s book “God Made Dad & Mom.”

The colorful children’s picture book seems pleasant. It never uses the word “gay” or “hate.” Many LGBT facebook pages have rightly described it as being about both. The point of the story clearly is meant to deride LGBT families as the ones that God did not “make,” even though it uses the most illogical and inaccurate plot to attempt to make its point.

Amazon.com describes the plot as:

Michael learns that God made men to be fathers and women to be mothers. After school, his father takes him to the zoo, where he learns that animal families consist of a male, a female, and their offspring. Upon observing these phenomena, Michael asks his father two questions: 1. Why does his friend have two fathers? 2. Am I adopted? His father sensitively addresses both of these questions with love and compassion, and he tells Michael that he needs to pray for his friend and his friend’s two fathers. His dad lets him know that he is adopted and that he and his mother love him very much.

The plot makes no sense from beginning to end. It implies that LGBT are not as “male and female” as heterosexuals. It theorizes that animals in nature are exclusively heterosexual, monogamous and dedicated to their children. It argues that a male and female who adopt are more suitable as parents solely because they have the ability to procreate. The fact that those things are all ridiculous does not matter since the book is targeting, according to author Amber Lee Parker, children from age 5 to 8 who are not likely to put the plot to the test of any kind of critical thinking.

The book’s illustrator, Hannah Segura, is a Nebraska home-schooled teen. Parker also resides in Nebraska. She was motivated to write the book over her concern that some laws in Nebraska might benefit LGBT families. She states, in an interview with BridgeLogos,

I had just went to a committee hearing in front of the judiciary committee to listen to a few bills that have been introduced and even though we as a state do not have same sex marriage, it was very clear the attack on traditional family values. One bill, would be, I believe it’s LB380, would allow any couple to adopt children, LB385 is a bill, same thing but was with Foster Care. And then LB485 was a bill which would allow telling businesses that they could not discriminate against LGBTQ which is lesbian, gay, bisexual, transgender and the other two bills I shares, the bottom line was you could not discriminate, they would be a protected class and you could not discriminate in these areas… there were those who were definitely infiltrating the family areas traditional values and basically, through this, making it look like the heterosexuality way was not normal.

Beyond her fear that LGBT people might be accepted in Nebraska, Parker’s stated effect on LGBT couples and families is more disturbing. Convinced that such families are not “what God’s views are of family,” she describes the reaction she would like to see: “Well the first step would be to turn away from the behavior that dishonored God, so in practicing homosexuality, I would say one of their first steps would be kind of difficult because we have people who are getting mortgages together, but they would have to separate themselves from that relationship so they could flee the temptation from the old yoke.”

From personal experience, I can assure Ms. Parker that her hopes in this area are delusional. Divorce in LGBT families is no more to be hoped for than it should be in heterosexual ones. My sons have had to deal with the loss and grief over the departure of my ex-partner several years ago. It was by no means a God-given blessing. They, like children of many divorces, still hold out hope that their parents will come back together.

The assumption that all people are heterosexual is a central feature of heterosexism. Biological diversity is ignored within a heterosexist context… The favoring of straight people in positions of political power ensures that those with the power are able to maintain it… The exclusion of gay people from a seat at the main table of society communicates the erroneous message that gay people are ‘less than,’ not worthy, not good enough. It lays the foundation for homophobia to flourish.

Parker hopes to inspire an innate heterosexism and homophobia in the young peers of my kids. When homophobia flourishes it inspires violence, self-destruction, and tragedy. In biblical terms, these are the “fruits” by which authors like Parker will be known, and they are not Godly.

Ms. Parker’s brand of “God’s-view-of-the-family” heterosexism was not my first such encounter. It was first said to my face as I interviewed a school for my sons to attend. I knew the school, which had an excellent academic reputation, billed itself as a “Christian school.” I wanted to be very upfront with the nature of my family and deal with any potential issues up front. “I am a single gay dad. I want to make sure you don’t have an issue with that if my sons were to come here,” I said to the school’s administrator.

A condescending look crossed his face. “Well,” he said smugly. “It will not be a problem for us at all, but I am not sure you are going to like what we would tell them.”

“Well, it is just like what I told a friend of mine who is divorced whose children come here. We just tell them that theirs is not God’s best plan for a family.”

It was one of those times, where for a moment, I sat in stunned silence. We continued talking about academics and special education.

As I started to leave, I paused and looked back at him. “You know, both the biological couples that had my sons had the opportunity to reunify with them and raise them. I turned over my will to God to help them, and do the right thing by my sons. It became apparent to all concerned, and presumably by God, that being with me was the right thing. I don’t know you, and I don’t know what God’s best plan for your family is, but for ours, we are it. Thank you for your time today, but I can’t enroll my sons here. They are very special little boys and I can only entrust them to a school that is dedicated to helping them be the best they can be, and helping them take pride in who they are. This school is clearly not God’s best plan for that.”

I did not bother checking for a reaction as I left the room.