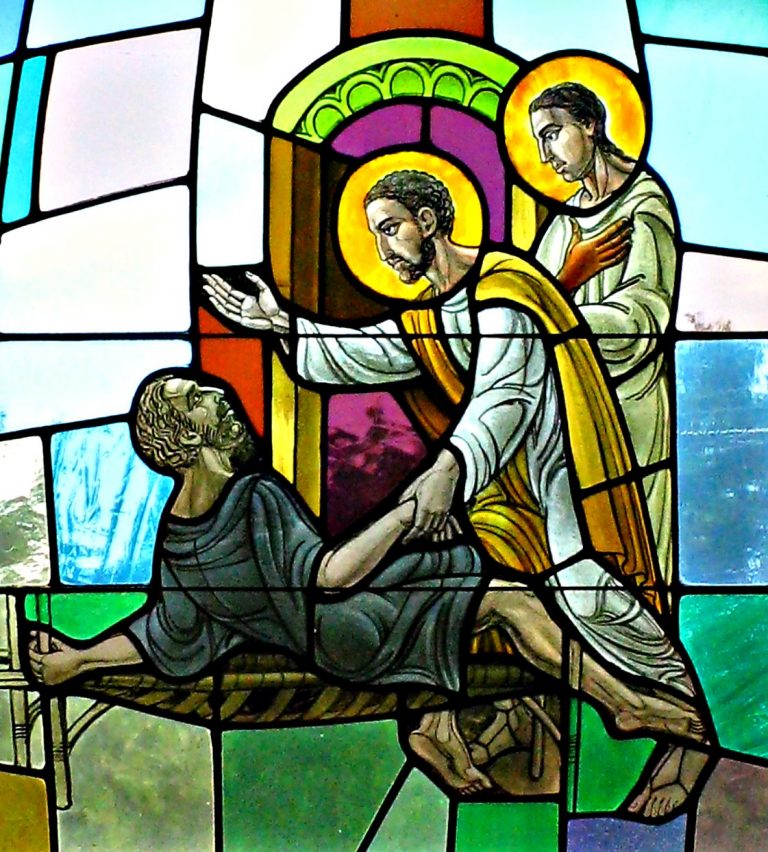 Queer Activism as a Return to Faith When I stopped going to church, I didn’t cease to think in terms of Christian ethics. The “off” switch just isn’t there. Although I hesitate to label myself according to my beliefs, the very fact that most Christians of my generation tend to display the same hesitancy almost makes me want to recommit myself to the term. Especially because being both gay and a Christian is a fairly divisive, even subversive, identity — a potentially activist position that claims God’s grace extends, yes, even to the “likes of these.”

Yet, it was the very concept of Christian activism — or at least its modern iterations — that drove me from the church. In the communities I floated through during that time, I felt that if I wasn’t devoted to a vocational ministry position in my home parish or some nonprofit organization attempting to solve problems on another continent, well, why bother being Christian?

While my participation in church helped me grow more aware of issues sprouting up closer to home, I failed miserably at taking any action. The methods to serve my neighbors who have found themselves homeless, in poverty, in sex work, in an endless cycle of prison time, felt like too little too late. More to the point, I felt as though my role inflicted a sense of shame on people caught in a deeply flawed system, a sense of shame that in reality reflected back at me. Who the hell am I? The godly believer with all the answers? No, Mary. So, ashamed of my own phoniness, of my own ignorance, I left, only to find I could not escape the Christian identity rooted deep inside myself.

When I came out a year or so later, I fell in love with the myriad LGBTQ groups making landslide progress for what I now could publicly claim as “my people.” I loved watching religious groups — Christian denominations I had previously been taught to scorn for their backsliding and sinfulness — join forces with secular activists to fight for equality for all people. Here was service dedicated to something I am familiar with: the bullying, the hatred (from others and self), based on sexual/gender identities, that too often result in abandonment, (self-) injury, and death.

The talk of marriage equality and the repeal of DADT were nice, too. I love a good parade. I love Robyn. And I love RuPaul’s Drag Race. Stage musicals. Hedwig & the Angry Inch. In the short time I’ve been “out,” however, I’ve noticed it’s not that different now than it was when I was “in” — at least since I’ve moved west of the Cascades. In Seattle, in particular, being a financially stable, white, gay, cisgender man hardly makes you marginalized. It’s like being Christian in America.

I got to enjoy the strife and martyrdom of coming out, and relished the pity of friends and confidants when I told them how difficult it was for me, coming from a conservative, religious background and all. And it’s been a ball since.  But I’m finding those Christian ideals popping up again in an unlikely place. It’s funny, really, because the very thing that drove me away from my religion is driving me back to it: activism.

I’ve been reading the likes of Kate Bornstein, Dean Spade, Mattilda Bernstein Sycamore, Yasmin Nair, and other queer activists often compiled on the site Against Equality. Many times over, they argue that marriage equality — particularly the boatloads of cash funneled to this cause — is actually bad queer politic because it benefits an elite few. The tax breaks benefitting those who have the resources and will to marry would remain inaccessible to those who lack either. They argue that fighting in the military risks the queer individual’s life for a government that systemically seeks to root out those who refuse to assimilate. Instead, they suggest that our activist dollars might be better spent by reforming the prison industrial complex that currently houses a disproportionate number of queer women of color, and which places these women at risk of abuse from guards and fellow inmates alike.

The glass threads spool from there into critical questions about hate crimes legislation, low-income housing, criminal cycles of poverty, and so on.  And I have to admit, I tend to read these arguments with hesitance, being new both to America’s gay culture and to the voices contradicting established gay rhetoric. I’m afraid I don’t always understand or immediately agree with the queer theory of it all, but I see what the likes of the Sylvia Rivera Law Project and TGI Justice (Transgender Gender Variant Intersex Justice) are accomplishing for abused and marginalized individuals in our community — and I see Jesus there. I don’t make much money at all, but I’d like to see mine and plenty more go to places like this.

The opposition to devoting so many resources to marriage equality, if I may, does not necessarily preclude the institution, but rather abounds from discontentment with the political and financial superiority a married couple has over anyone who chooses to remain single, as though those who prefer to remain unmarried should for some reason pay a higher fee. This strikes a chord with my own long-standing frustration with church hierarchy that promotes marriage above all else in a person’s life, as if simply forgetting the tradition of both Jesus’ and the Apostle Paul’s bachelorhood.

I’ve been rapidly coming to understand the queer activist positions, ironically enough, through a fundamentally Christian lens, one that compels me to look to those in greater need than I.

And frankly, it’s pretty clear to me that my frictions with family and spiritual baggage pale in comparison to the gender-queer person of color fired from another job for not complying with arbitrary dress codes, then getting arrested for sex work performed to make rent that month, only to find both cellmate and prison guard to be rapists in the night.

What is becoming clear to me is that, much like the church’s obsessions with its own perpetuation, the gay establishment’s press for specific, almost binary, progress (marriage and military service) frequently loses sight of the face of the deep, tangible needs within its community.  And it is to those needs that our activist energies are best applied — energies I now see more clearly as consistent with genuine faith.

Do I now have the solutions to a world full of hurt? No, Mary, I wish I did. But I’m learning. I’m beginning to see where “majority rules” fall short, the horrors some fierce and uncompromising people are pointing out, and how a fool quibbles with a finger that is pointing at the sky.

DAVID K. WHEELER is the author of Contingency Plans: Poems, a finalist for the Melville House 2011 Booksellers Choice Awards. He has written for The Morning News, The Gay & Lesbian Review, Burnside Writers Collective, and has poems forthcoming in Emerge Literary Journal and The Citron Review. Follow him on Twitter @daviewheeler.

by David K. Wheeler Contingency Plans maps the body, the land, and the hollows therein, eager to determine their dimensions, carried along by possibility, to find that what once made us anxious is out of the question, and what has kept us awake now sings us back to sleep. Note to teachers: excellent for classroom use if you are teaching villanelles and sestinas.