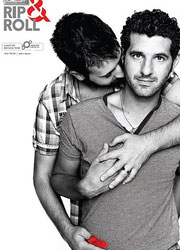 Why Nobody takes the Church Seriously Anymore I was just sitting here, minding my own business, cup of coffee in hand, browsing through various news stories that posted headlines on Facebook, and an otherwise insignificant blurb made me angry.

The article was about an advertising company in Australia reversing its decision to pull an HIV Prevention ad from local buses. They’d run it, gotten some negative backlash from the public, so they pulled the ads. Then, after a second wave of public outcry at the recall, they reinstated it. Simple business flip-flop. The ad was sponsored by the Queensland Association for Healthy Communities, and the image was of two men embracing, holding an unopened condom. Pretty tame stuff compared to what people see on TV these days. What was the big deal? The photo wasn’t shockingly offensive, and the purpose was to save lives, so what was all the hooplah about?

Those pushy Christians were at it again. Turns out that the initial complaints came from a certain “Christian lobby”, trying to control the world again. Once the company realized it was a targeted political campaign by this group, they reversed course and put the ads back up.

And I thought, doesn’t the Church have anything better to do? Isn’t this exactly why people never turn to the Church when they are in real spiritual need? The world — people, real human beings — see the Church as a bizarre  organization full of angry people bent on putting society into a strangle-hold to preserve some artificial traditional values as though they originated on Mt Sinai. Is this what the Kingdom of God has become all about? People so focused on gaining power over others, controlling TV, schools, making laws about who other people can or cannot love and build families with? Since when has Jesus’ commission been to become the “God police”? No wonder nobody outside the Church takes the Church seriously.

The Great Commission is and has always been to make disciples. And the purpose was not to build a society of religious clones, marching to the same tune of morality and religious beliefs. The point was to bring lost and hungry people back into a relationship with a God who loves them.

When Christians fail in this mission — or substitute some other agenda in its place — the inevitable (and only) result is a mockery, an empty shell of ritual and tradition. One might as well paint “Ichabod” over the buildings in huge red letters — “God doesn’t live here anymore.”
Church folks regularly bemoan the exodus of the youth. Congregations become greyer and more wrinkled, as younger generations see the Church as irrelevant, out of step, offering nothing. Holier saints pray for revival, expressing their desire for this generation to see the moving of God with power as they may have seen in years long since passed. But then they load upon their brothers and sisters a burden of rules, regulations, traditions, and lifestyles — legalism, by any other name — and wonder why no one is pounding on the church doors to get in.

When we, as believers, focus less on eliminating “safe sex” advertisements from public buses, and start focusing more on the hurt, on those in need, on introducing those who hunger and thirst for “something more” to a God who loves and embraces them, that’s when we’ll see those days of “power” again. That’s when the Spirit of God will move again in our congregations in ways that caused previous generations to impact their neighborhoods and cities. Not by laws. Not by protests and targeted email campaigns. But by the Spirit. When we get back to what’s actually important to the heart of God, that’s where the Presence of God will manifest.

If we want a “real” move of God, if we want the “real thing”, then we’ve got to start focusing on what’s “really important” to Him. And that won’t be protesting civil union laws in Illinois, or condom ads in Australia. It will be getting back, once again, to the primitive message of “Let anyone who is thirsty come to me and drink …” Maybe then the world will start taking Christianity and the Church seriously again. And until that time, we don’t deserve their attention.