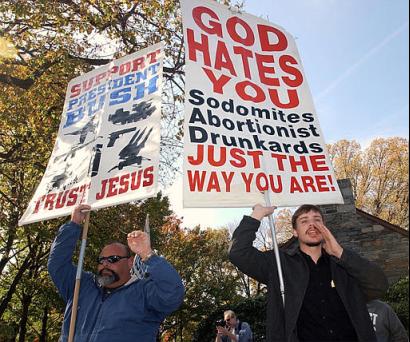 A friend and I were having lunch yesterday when he announced that he was creating a list of thought-provoking questions to challenge Christians to rethink some of their conventional and comfortable positions. The topics ranged from “who can be a Christian” to “must a Christian tithe” to social and political agendas in the church.

This morning, I read an article about a group of conservative ministers who went to Washington DC to protest against the recent expansion of hate-crimes legislation to include crimes committed against people based on their personal sexual preferences. The ministers actually WANTED to get arrested, to prove that Christianity was under attack and that Christians were being persecuted and prevented from exercising their faith.  The article left a foul taste in my mouth. I am an American, and more importantly, I am child of God, touched by His grace and filled with His Spirit. And nothing in their behavior represented me, my faith, or (from my perspective) my Lord.

As Americans, everyone has the right to voice his or her opinion about social issues and to try to influence legislation. I understand that conservatives may feel that their traditional values are being eroded in 21st Century America. And I can understand how some pastors may feel the compulsion to protect their flocks by taking action against what they perceive to be immoral forces at work in the world — I understand the pastoral instinct to protect. But I do not understand the motivation, the anger, the hostility, the provocation in stirring up political dissent.

In American history, great social movements have been lead by church leaders: the Quaker abolitionists fighting against slavery in the 1800s, hard-line Protestant preachers calling for Prohibition to combat the evils of alcoholism, leaders on both sides of the issue shouting over the rights of women to vote, or protesting for and against segregation of whites and blacks. Even in our own romanticized American Revolution, preachers played a significant role in urging the people to action (again, both for and against). But does that make it right? The fact that in each of these cases men of faith and integrity arduously fought on opposite sides of the cause, quoting Scripture and the divine will of God as their defense, ought to make us question the legitimacy of mixing faith and politics. As the Apostle Paul said, “we wrestle not against flesh and blood, but against … spiritual forces”. And Jesus himself stated at the very birth of Christianity, before his death, that his Kingdom was not of this world, that if it was, his followers would fight — and indeed the angels themselves could be enjoined to battle for the cause. But this is not who we are. This is not what we are to be about.

Did Jesus speak out against the decadent Roman culture? Did Peter or James or John or Paul stir up the flock for political action, or call for change in the social order?

“I must be about my Father’s business.”
“My food is to do the will of Him who sent me, and to finish his work.”
“This is my commandment: Love one another.”
“Jesus of Nazareth went about doing good, and healing all who were oppressed by the devil.”
“Go into all the world and make disciples, teaching them to observe everything I have commanded you.”
“These signs will be the mark of those who believe: in my name, they will cast out devils, they will speak with new tongues … they will lay hands on the sick for healing.”

This is our job, this is our mission. To make disciples. To love. To heal. To set captives free from the bondage of sin and death. To proclaim the FAVOR of God. To call for repentance, that all people should return to God, and then announce that holy reconciliation has occurred: Mankind brought back into full fellowship with God by the death and resurrection of Jesus Christ.

Anything else for a minister is a distraction. A waste of time. A hindrance to the purposes of God. And if I may speak boldly, it is prostitution. Men and women of God are called to higher purposes: the salvation of humanity, and the maturity of the saints.

As citizens of a great republic, we have the right — even the civic duty — to voice our convictions and to vote according to our consciences. But we must never dare to drag the name of our Exalted Lord into this worldly effort. He never authorized us to act for him in this arena. Not once. His instructions are clear. And they are already more than we can handle, already more than enough for us to do. Let congregations — even pastors — march on Washington. But don’t wave the banner of the Cross in your crusade. It is not a holy fight. And, as shepherds of His flock, commissioned with a sacred trust, if that’s where your energies and efforts are devoted, then you have lost your first love. You have gone AWOL from your duty, and abandoned your calling. We walk in two worlds, and we must never confuse the two.

Is there such a thing as Christian politics? Not according to my reading of Scripture.