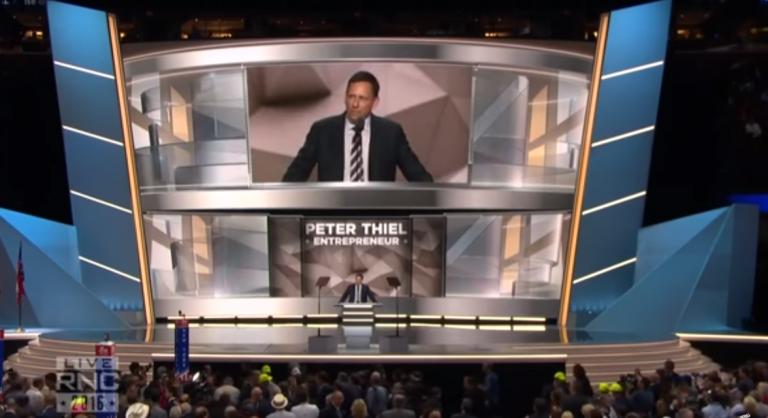 I see you. I saw you on that stage tonight. Your incessant need for reassurance and acceptance by the very same people who would strip you of your rights if they could; it’s fooled you into thinking you’re one of them. I saw your education, your haircut, your suit, your whiteness, your privilege. They saw your money and influence.

But if they saw you on the street corner working for a warm room and $20 you would be nothing but another well-deserved HIV case. If they saw you in the high school lunch room being picked on and bullied you would be told it could all get better if you just tried “conversion” therapy and prayed harder. They still see your marriage as not equal, let alone lawful. They see a right to discriminate against you when selling public goods based on personal bias. They see your family, your beautiful and sometimes unwanted children, as a corruption of their ideals and values.

I see your blatant disregard for Trump’s attacks on every single group of vulnerable people who are not straight white Christian conservative males. I see your contortions as you try to reconcile your choice of beliefs with their attacks on the people that we have been and still are. I see you bowing to the dollar. You have the carefree attitude of someone who has nothing more at stake than tax dollars; your ignorance of the struggles of the poor is repugnant at best.

While you stand there declaring your pride in being an American, just remember, many immigrants in this country, at this moment, would also love the chance to be represented by our flag, but they will be denied that by the same man you support.

Tonight you smiled broadly and basked in what you thought was genuine adoration. Don’t mistake your surrogacy as a Trump sycophant and the number of dollars in your bank account as real admiration for you as a person. All you proved tonight was that you could make them feel good by checking that diversity box as their “gay friend.”

KIENAN MICK is a resident of the beautiful, lake filled Twin Cities. He has a degree in Economics from the University of Minnesota, and an MS in Applied Economics from the University of North Dakota. In his spare time, he enjoys amateur photography, nature hikes, and bird watching. His interests lie in “alternative” economic systems where the public, unions, and co-ops take a greater stake in our economy.
[/box]